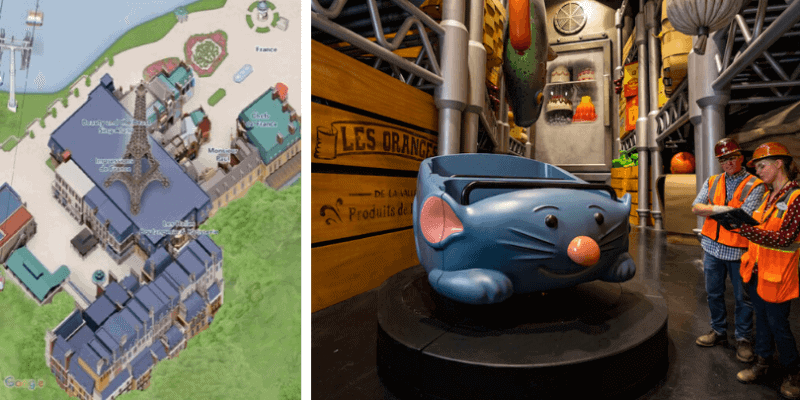 Even though the Disney Parks are temporarily closed right now, that doesn’t mean Disney’s team isn’t still looking toward the future. And with all the updates being added to the Disneyland and Walt Disney World apps, guests have a lot to look forward to. EPCOT’s expanded France pavilion — including the new attraction, Remy’s Ratatouille Adventure — has now been added to the My Disney Experience app.

If you take a look at the screenshots that we took from the My Disney Experience app today, you can see that EPCOT’s France pavilion expansion has been added to the theme park map. Before the Disney Parks closed temporarily, Disney was hard at work on the expanded France pavilion. And even though construction has been temporarily halted due to health and safety concerns, guests can now take a peek at the My Disney Experience app to see a preview of what they can expect in the World Showcase later on.

So far, we know a lot of exciting new offerings are coming soon to EPCOT’s France pavilion. We’re getting the new ride based on the Pixar film Ratatouille and inspired by the Walt Disney Studios park attraction of the same theme at Disneyland Paris. We’re also getting all new dining opportunities within the France pavilion. This area of the park was already one of our favorite World Showcase pavilions in EPCOT, so we’re pretty happy that there is so much coming soon.

While we don’t yet know the reopening date for the Walt Disney World Resort, we do know that sometimes the best way to cure the Disney blues is by planning a trip. Click here to reach out to an Authorized Disney Vacation Planner and start planning your 2020 or 2021 visit to the Most Magical Place on Earth.

What do you think of all the updates Disney is adding to the Disney World and Disneyland apps? Let us know in the comments.