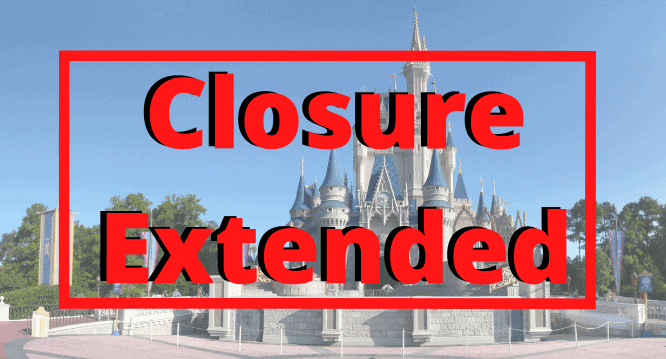 Governor Ron DeSantis has been dealing with mandates and public measures to stem the spread of the novel Coronavirus among his residents. With the Florida public schools closed until at least mid-April, and Orange County Mayor Jerry Demings announcing today that all county residents must shelter in place effective Thursday the 26th at 11 p.m. it’s no surprise that Disney Parks announced an extended closure of the Walt Disney World Resort Hotels and associated properties.

RunDisney’s Star Wars Rival Run Half Marathon Weekend that was scheduled to take place on April 16-19, 2020 has also been canceled. The Walt Disney World Resort closure is extended indefinitely.

Inside the Magic proposed in a recent article that the Disney Parks would have to extend a closure if they were to abide by the new California Guidelines. While we’re sad to see the extended closure of Walt Disney World Parks, Hotels and Disney Springs, we’re glad for the care and concern of guests and cast members. Disney has been closing businesses down slowly after the initial shutdown of the Walt Disney World Parks on March 16th, 2020. Disney Springs quickly followed behind with entertainment (Splitsville) and storefront closures and then lastly, Cirque du Soleil announced the postponement of their performances. Inside the Magic had an editor at Walt Disney World Resort during the last days of service and you can read her personal story here.

The official Disney Parks News announced on their Twitter feed,

The Walt Disney Company has been paying its cast members since the closure of the parks, and in light of this ongoing and incredibly complex crisis, we have made the decision to extend paying hourly parks and resorts cast members through April 18th.

The State of Florida is under stress with mandates and orders such as business closures, curfews, and limited gatherings in accordance with the CDC. In order to stop the spread of coronavirus, Florida Governor Ron DeSantis ordered bars and nightclubs in Florida to close for 30 days and directed restaurants to operate at 50% of their maximum capacity to allow for social distancing. He also asked that travelers from New York self-quarantine as NYC becomes the epicenter of the breakout in the United States of America. NBC Miami shares more information about the closures and mandates county by county. So far, State public schools will remain closed until April 15, 2020, and online learning plans began March 23rd, 2020.  The federal government has recommended no gatherings larger than 10 people, and as you can imagine, it would be impossible to limit groups to 10 people in any of the Disney Parks.

Currently, Florida has more than 2300 cases with 28 deaths with Orange County suffering 110 of those cases. There is a stay-at-home mandate until April 9th, 2020, which Orange County Mayor Jerry Demings mentions can be extended if need be. State Governor Ron DeSantis said he’s not ready to issue statewide stay-at-home mandate. Testing remains limited and has yet to show any cases of the virus in a third of Florida counties. Like the neighboring state of Georgia, Governor DeSantis had previously let local cities and counties to their own judgment on how to limit public activities and businesses.

When is your next trip planned to Walt Disney World Resort? Leave us a comment about what you’re looking forward to doing once the Parks reopen!