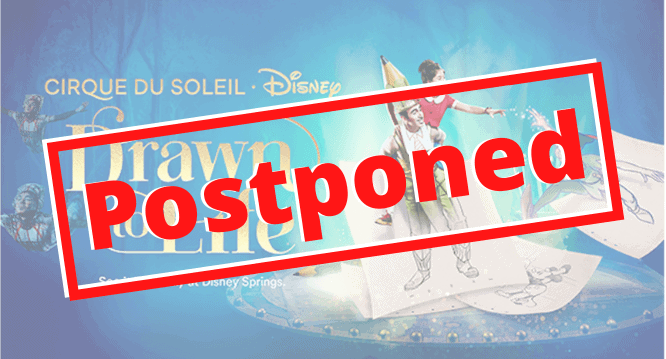 The global pandemic has shuttered many businesses already, including beloved restaurants like Rainforest Cafe, Homecomin‘ and even halted Disney productions like Falcon and Winter Soldier. Added to the list of casualties now is the Disney Springs production of Drawn to Life, created by Cirque du Soleil.

Disney Springs had already closed many of the available attractions following the temporary closing of Walt Disney World Resort, but it looks like the acrobatic troupe has closed more than just our hometown production. Cirque Du Soleil has now suspended not only Disney Springs’ “Drawn To Life” but has also laid off 95% of its entire company.

Cirque Du Soleil Lays off 95% Of Its Entire Company

The circus company, based in Montreal, Canada, announced that it would lay off 95% of its 4,679 company members on March 19, 2020. They are only keeping on under 300 staffers to maintain a basic operation to promote future shows, remounts and the reopening of the worldwide tours and residencies, Forbes mentions.  “The company was left with no other option but to call for an unprecedented halt in [any] activity until the pandemic is controlled and its performers, employees, and audience members are no longer at risk,” said the company in a statement. The large touring company had over 44 shows around the globe and suspended Las Vegas shows on March 15th, 2020.

Cirque du Soleil announced on March 17 the closure of many productions and apologized to fans on their Twitter feed.

UPDATE MARCH 17: We’d like to thank you for your support in these challenging times.

We share your disappointment in regard to the suspension and postponement of our shows around the world and we want you to know we’re working with our partners to find solutions for everyone. pic.twitter.com/ywKSX8mUEJ

Forbes also relays a comment from a spokesperson to the Montreal Gazette,

“As we speak today, there is no revenue coming in for the company and I don’t know when it will come back, which is why we’re doing what we are doing. We have laid off most of our employees and we will keep just a small fraction of employees to be able, whenever the situation is stabilized, to come back in a short period of time.”

Based upon the beautiful essence of hand-drawn animation, Drawn to Life was meant to begin hosting previews on March 20, 2020, with a grand opening on April 17, 2020. Instead, the production is postponed until further notice.

Disney Guests and Orlando customers holding tickets will be contacted by the point of sale for refunds or other postponement options. Following the closure of the theme parks, resort hotels, and Disney Springs locations, the hard decision to close down the theatrical production was next to be made. Previously this month, the Disney Parks Blog had released inside looks to this artful production, revealing costumes, set pieces and theming, hoping to entice theatergoers:

“Our main character is Julie, a courageous and determined young girl. Her father, Tom, was a Disney animator who raised his daughter and surrounded her with Disney animated characters who helped her grow and played important roles in her life.

When Julie finds an unfinished animation piece and a letter from her late father, her imagination is awakened, and she embarks on an inspiring journey into the whimsical world of animation. Along the way, she meets characters like Mr. Pencil (her father’s favorite pencil), who help guide her. Julie also encounters Miss Hésitation, the story’s villain, who reflects Julie’s own doubts and fears as an artist.

Throughout her adventure, Julie is reunited with Disney characters from her childhood, giving her the encouragement she needs to animate with her own unique artistic voice.”

The Disney Parks Blog even went so far as to post a preview video to engage our imagination and taste for the production. Watch the video below to see what you can look forward to when the show reopens.

Have you seen a Cirque Show at Disney Springs? Leave a comment below with your favorite memory of the productions!