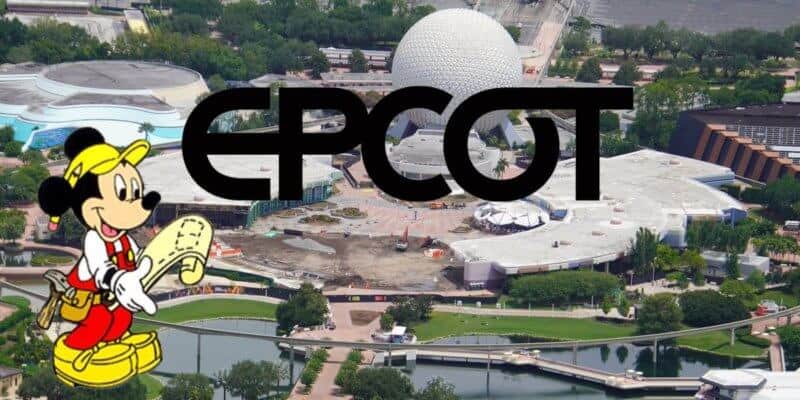 One of these changes is that EPCOT is debuting three brand new lands – replacing what is now known as Future World. The purpose of these three new lands is so that all of EPCOT will be a unity of four neighborhoods that speak to each important aspect of the world. World Showcase, which has already been apart of this park, will be joined by World Celebration, World Nature and World Discovery. (You can read more about these changes here).

And as the parks had to temporarily close due to the current global pandemic, the construction on the EPCOT overhaul also had temporarily pause.

However, as Walt Disney World gears up for its phased reopening this week, construction is also continuing on the EPCOT overhaul. Thanks to our friends @bioreconstruct, we have aerial photos showing the work being done at EPCOT. Let’s take a closer look!

In the tweet below, you can see an aerial view of orange barriers outside the main EPCOT gift shop.

Aerial look at an unusual pile of orange barriers outside the redo of the main EPCOT gift shop. pic.twitter.com/xm6GFMlM2H

And in this tweet, you will see an aerial photo of the work resuming over at the EPCOT entrance plaza!

And here’s another view of the construction resuming at EPCOT, which was on hold since March.

This is where Club Cool used to be located before it was shut down as Disney began working on the EPCOT overhaul. Also in the aerial photo is former Innoventions.

Aerial view of the ceiling of the basement of the former Innoventions. Note the stairwell at left. An entrance to Club Cool was to left of that stairwell. pic.twitter.com/zSMzifW3MR

If you are looking for a complete guide to everything coming to EPCOT along with this major overhaul, check out our article here.

There is so much coming to EPCOT for this major overhaul. What are you looking forward to most? Let us know in the comments.

Comments Off on PHOTOS: Construction Continues on EPCOT Overhaul