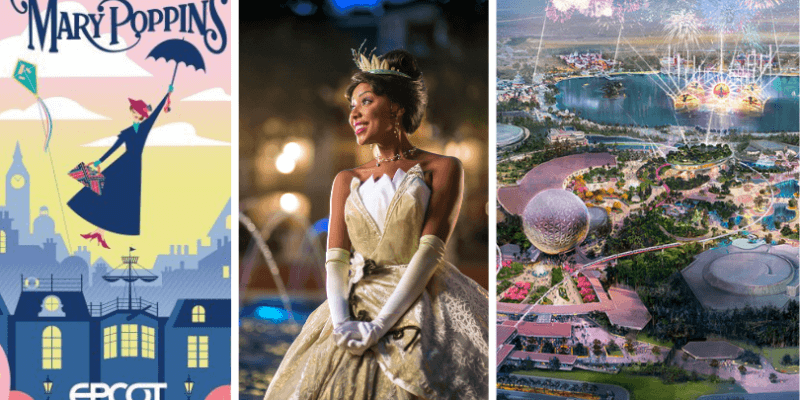 Disney fans wait years to find out the exciting announcements revealed at D23 Expo every other year at the Anaheim Convention Center. And today, we learned more than we could have ever thought possible at the Disney Parks, Experiences, and Products panel. From all of the amazing new attractions coming to Epcot and Magic Kingdom to even more details about what’s coming for fans on the west coast at Disneyland Resort and even some news about Disney Parks around the world, here’s everything we learned at the 2019 Disney Parks panel at D23 Expo.

As you read, click on the name of every attraction and experience listed to see what’s coming soon.

By far, the most information that came out of the Disney Parks, Experiences, and Products panel at D23 Expo was about the major transformation underway at Epcot. This theme park is getting some amazing upgrades and fantastic transformations, creating stunning environments and attractions for guests to experience. From all-new attractions themed after Moana and Mary Poppins to the overhaul of Future World making way for three new lands and even the addition of a Walt Disney statue, everything coming to Epcot will be truly spectacular. Below are some highlights of what was covered:

Name and details for Guardians of the Galaxy coaster

Future World to be replaced with three new lands

In addition to Epcot, the rest of Walt Disney World is joining in the fun of celebrating the 50th anniversary of Walt Disney World. From all-new attractions like TRON to some fantastic entertainment, we have so much to be excited about. Here’s what Disney shared in the panel:

Special food and experiences in the theme parks

Of course, we couldn’t mention Walt Disney World updates without bringing up the news we learned about the Star Wars hotel coming soon as part of the immersive Star Wars: Galaxy’s Edge experience at Disney’s Hollywood Studios. Read all about it in the link above.

We’re getting some unbelievable new attractions on the west coast, too, and even though Disney didn’t share nearly as much information about Disneyland as Walt Disney World at D23 Expo, we’re definitely still excited about what’s to come. Take a look at what was revealed:

Announcement of an all-new daytime parade at Disneyland

We got some updates regarding the international Disney Parks, but by far the most focus was on Hong Kong Disneyland and the epic new changes coming soon to that theme park. Disney announced that the first-ever “Frozen”-themed roller coaster is coming soon to Hong Kong, and while we’re jealous that it’s not coming to California, we now have even more reasons to visit every Disney Park in the world. Check out all that news and more here.

We finally heard more information about the upcoming new additions to Disney Cruise Line! Disney finally announced the name of the fifth ship in the Disney Cruise Line fleet, and if you’ve never been on a Disney Cruise before, now’s the time to take one. Disney also revealed the creativity and innovation behind their second private island in the Bahamas. You can read all those updates here.

Remember that you can experience all of this magic and more by booking a Disney vacation, and Academy Travel can help. The Authorized Disney Vacation Planners at Academy Travel can make your Disney dreams come true, whether you want to visit Walt Disney World, Disneyland, Disney Cruise Line, or somewhere magical beyond your wildest dreams. Click here for a free, no obligation quote!

Which of these epic reveals are you most excited about? Share your thoughts on the Disney Parks news revealed at D23 Expo!