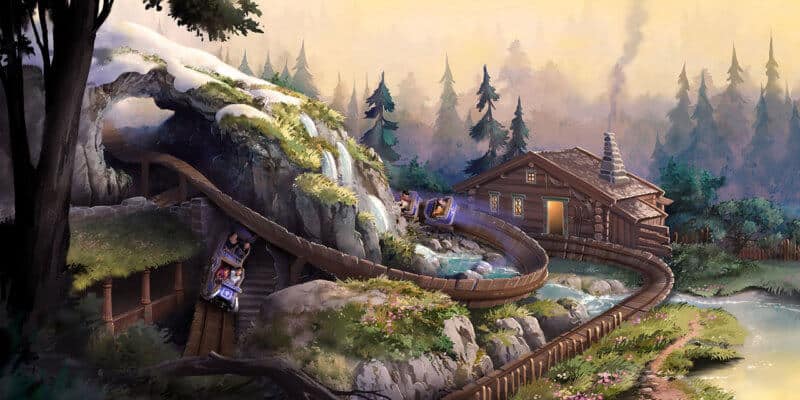 In the wave of Disney Park announcements, D23 attendees got a first look at the Frozen additions coming to Disneyland Hong Kong, including a “Frozen”-themed roller coaster.

Disney Parks, Experiences and Products Chairman, Bob Chapek, revealed the concept-art for Wandering Oaken’s Sliding Sleighs. Beginning at Oaken’s infamous store, guests will board sleds which will to the top of a hill by Sven and Olaf. The sleds will then be sent off on a winding journey through Arendelle.

Wandering Oaken’s Sliding Sleighs will be a brand-new attraction of an entire Frozen-themed land that is coming to Disneyland Hong Kong that is set to completely immerse guests into Queen Elsa’s mystical Nordic kingdom. And guests visiting the land will get to join Elsa as she creates an unforgettable “winter-in-summer” day. It was also reported that Frozen Ever After–the beloved EPOCT attraction –will be added to this land.

This land promises to be the chance for Frozen fans all around the world to immerse themselves in the world of their favorite Disney movie like never before. They will be exposed to the sights, sounds, traditions, and cuisines.

The news of this land comes on the heels of other Frozen announcements earlier in the weekend. D23 guests were given sneak peeks of the upcoming “Frozen 2” which revealed new characters and new clues to the next adventure that awaits Anna, Elsa, Kristoff, Sven, and Olaf. Attendees were also given live song performances from the cast. And, it’s safe to say that the hype continues to grow as we prepare to return to Arendelle both in the theaters and in the parks.

What do you think of Disney’s decision to dedicate an entire themed land to “Frozen?” Are you excited? Let us know in the comments.