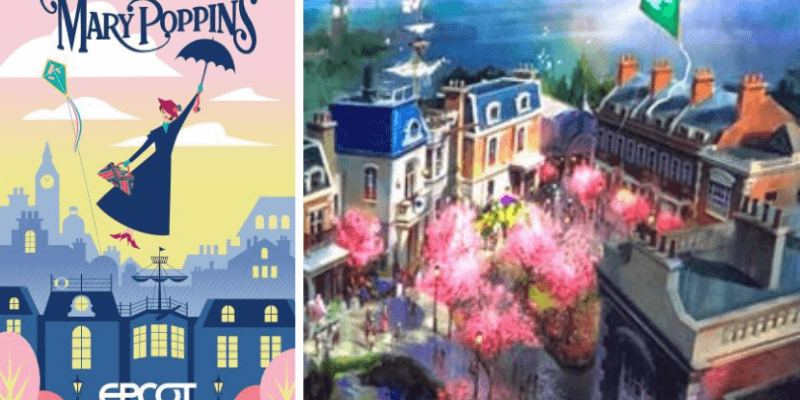 A new Mary Poppins attraction is coming to Epcot, and we are just about speechless.

We’ve expected big announcements about Epcot long before the D23 Expo ever opened, and today at the Expo, it was announced that the park is getting a new Mary Poppins-themed attraction! We don’t have a name for the attraction yet, but we do know that the attraction will have a heavy emphasis on music.

Cherry Tree Lane will be a brand new neighborhood within the United Kingdom pavilion, and the attraction will have Guests entering the Banks’ home where the Mary Poppins-themed adventure begins.

The new addition to Epcot is just one of many changes we’re hearing about today at the D23 Expo for Walt Disney World’s second park Epcot opened on October 2, 1982, 11 years after Magic Kingdom opened. And though the park has seen some changes over the years, a massive overhaul has never been undertaken.

We’ve heard for a while now that big changes were coming to Epcot. So far during the 2019 D23 Expo, we’ve learned about a few of those changes. A brand-new attraction inspired by Disney’s “Moana” is coming to Epcot. It’s called “The Journey of Water,” and though we don’t have an opening date yet (since they haven’t yet begun construction), we are so excited about the addition to the park.

It was also revealed that the park is getting a slightly new logo. We wondered if Disney would add “Center” back to Epcot’s name, as it was named years ago, but so far, we aren’t hearing about a name change–just a slight change in the logo. You can see it in the photo below.

We can’t wait to see the finished product after Epcot’s re-imagining is complete, and we are thrilled about this new attraction!

Are you ready to book a trip to experience this new attraction and all the other exciting additions to come? Look no further than Academy Travel. The Authorized Disney Vacation Planners at Academy Travel can plan every aspect of your trip, from booking your hotel and tickets to making dining reservations and even offering expert tips and tricks. Click here for your no-obligation vacation quote from Academy Travel

What changes do you think need to be made at Epcot? Do you like things the way they are? Let us know in the comments section below!