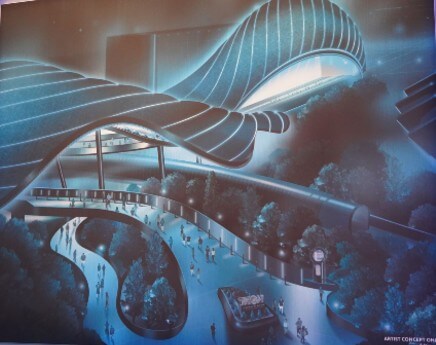 During the preview to the D23 Expo at the Anaheim Convention Center on Thursday evening, we were experiencing information overload–but in a good way, of course! We got to see a new logo unveiled for Epcot, beautiful new posters of Epcot attractions–past, present and not yet built–and we found out that the new Marvel-themed land will be called “Avengers Campus.”

But we got even more excited when we were lucky enough to have a sneak peek at the costumes and ride vehicles that will be used on the new TRON Lightcycle Run roller coaster attraction currently under construction in Tomorrowland at Magic Kingdom at Disney World. Just take a look at the sleek design of the coaster vehicle that was on display for fans attending the D23 Expo. 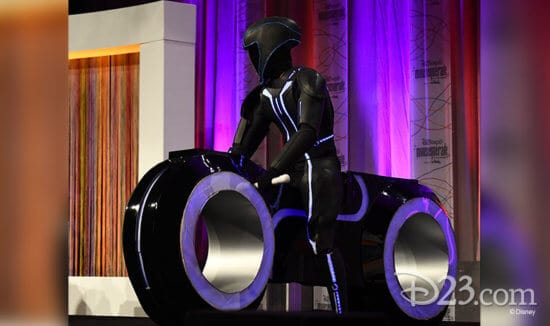 The Lightcycle looks fast because once on the track for the new ride, it will be very fast!

The version of the TRON Lightcycle Run ride at Walt Disney World’s Magic Kingdom is being constructed just north of the Tomorrowland Speedway as an exact replica of the attraction at Shanghai Disneyland.

The Shanghai Disneyland attraction opened with the rest of the resort on June 16, 2016. The Walt Disney World TRON Lightcycle Power Run attraction is scheduled to open sometime in 2021. The exact opening date has not yet been released to us, at least as of right now (but there’s still more news to come from the 2019 D23 Expo). We have heard, however, that the all-new roller coaster attraction will be open in time for Walt Disney World’s 50th anniversary celebration on October 1.

The TRON Lightcycle Power Run will be a semi-enclosed launched steel coaster that will reach speeds of more than 60 miles per hour, making it one of the fastest rides at the Walt Disney World Resort!