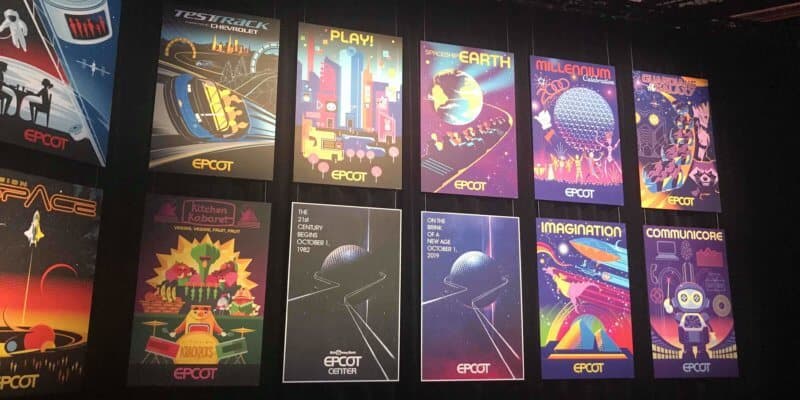 Credit: Bailee Abell / Inside the Magic

Disney has just revealed some of the all-new posters for Walt Disney World’s Epcot at D23 Expo. The posters, created by pop-culture artists Eric Tan and Stacey Aoyama, are now on display at D23 Expo. Let’s take a closer look!

Tan, who has been a designer for Disney Consumer Products for over 15 years as has his wife, created these vividly-colored posters that depict many of Epcot’s attractions from days gone by that are no longer at the park, such as Norway’s Maelstrom, Kitchen Karbaret, Communicore, Wonders of Life, and the Universe of Energy attraction that was recently reimagined to make room for the Guardians of the Galaxy attraction.

Other Epcot attractions posters by Tan and Aoyama on display tonight at the D23 Expo feature current attractions at the park, such as Turtle Talk with Crush, Frozen Ever After, and the Gran Fiesta Tour starring the Three Caballeros. Other current experiences depicted in the posters include the soon-to-be extinct Illuminations nighttime show and the Seas with Nemo and Friends attraction in Future World.

Even more of the new Epcot attraction posters that celebrate the future of the park are also on display. The artwork in these posters makes the future seem like it’s right around the corner. One of the vibrant posters depicts the new Ratatouille-themed attraction soon to open at the France pavilion on the World Showcase.

In the photos, you’ll notice a few spots that read “Revealing Sunday” and it’s those blank spots that have us most excited. We will have to wait until the end of the Expo to see what’s depicted in those spots as coming attractions. 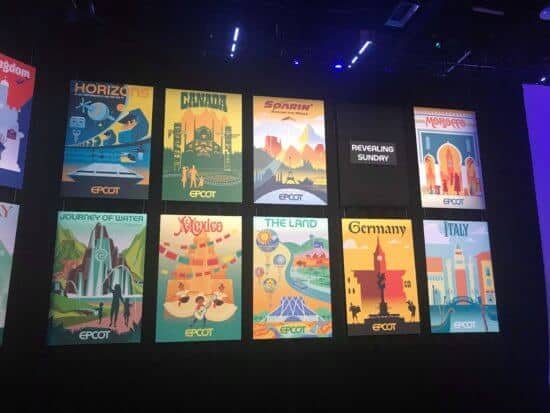 You can also see Epcot’s new logo at the bottom of each poster. The logo was also revealed at the D23 Expo preview.

What do you think about Epcot’s new logo? And which of the Epcot attractions posters is your favorite? Let us know in the comments section below.