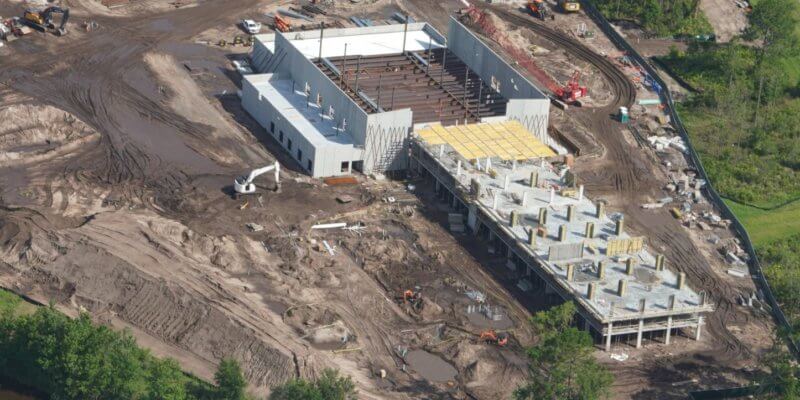 The Star Wars hotel coming to Walt Disney World is still on its way as new images have revealed that the structure is currently under construction at Disney’s Hollywood Studios.

The new images shared on Twitter by user @Bioreconstruct, show only the skull and bones of the Star Wars-themed resort. The new intergalactic hotel was only announced at D23 Expo 2017. Although, for a while it’s felt as if this hotel was lightyears away and from these new images, it seems it might still be a little bit before we see the hotel open for operation.

Aerial view of the Star Wars Hotel. A concrete forms are being placed flat in the cabin area. Look close and you can see a few concrete walls through all cabin floors. pic.twitter.com/iI02oxMuJE

In the images, most would only see a clear plot of land with a fairly new looking building structure that is only made up of concrete walls and steel beams. Although, what most Disney fans see is the coming of an out of this world opportunity meant to further immerse guests into a galaxy far, far away!

Not many new details have been revealed about the project. However, when it was first announced back in 2017, it was revealed that it would be a  “living adventure” that features an “entirely new form of Disney storytelling.”

During the announcement of the project, Bob Chapek, Chairman of Parks, Experiences, and Products, said “It’s unlike anything that exists today…From the second you arrive, you will become a part of a Star Wars story! You’ll immediately become a citizen of the galaxy and experience all that entails, including dressing up in the proper attire. Once you leave Earth, you will discover a starship alive with characters, stories, and adventures that unfold all around you. It is 100% immersive, and the story will touch every single minute of your day, and it will culminate in a unique journey for every person who visits.”

At D23 Expo Japan 2018, Chapek revealed that the hotel “will be seamlessly connected to Star Wars: Galaxy’s Edge.” That means from the time you check in to the time you leave, you could live, sleep, eat, and breathe nothing but Star Wars.

Here’s the full statement from Disney:

Aerial overview of the Star Wars Hotel construction at Walt Disney World. A berm seems to be shaping at right. pic.twitter.com/ZOXb8ZjXRP

To give a perspective of how guests staying at the hotel will be able to move from the resort to Star Wars: Galaxy’s Edge, we’ve shared this image below showing their close proximity.

Disney has not commented on an official opening date of the hotel. In fact, many believed it would be open by the time of Star Wars: Galaxy’s Edge in Walt Disney World. Although, from these images, it seems the hotel may have a while before it officially opens for business.

For those who cannot wait to see the new hotel, be sure to take a look at the concept images below that Disney shared of the coming hotel, in addition to some animated concept art.

What are your thoughts on the fact that the Star Wars hotel will most likely not open with Star Wars: Galaxy’s Edge at Disney’s Hollywood Studios? Let us know in the comments below!

All images of the construction of the Star Wars hotel featured in this article are from Twitter user @Bioreconstruct.