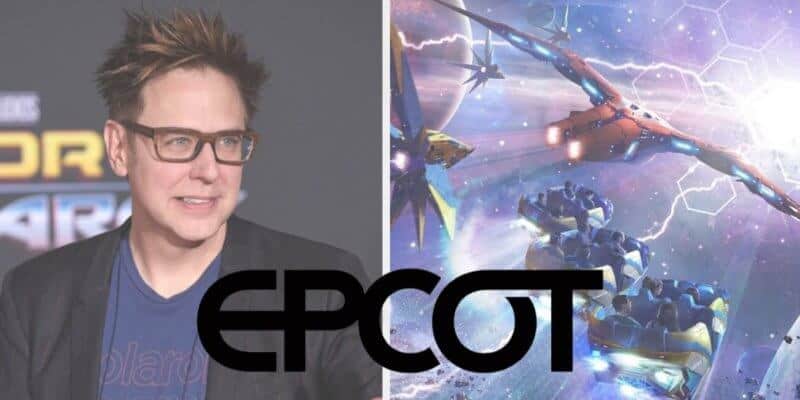 The upcoming family-friendly roller coaster will feature a reverse launch in space and will be a never-before-seen storytelling coaster that actually rotates the Guests aboard the ride to focus them on all of the action. It has also been confirmed that the ride vehicle will rotate.

Many fans everywhere have been looking forward to the upcoming EPCOT Guardians of the Galaxy: Cosmic Rewind attraction, not exactly knowing what to expect. However, we may have a bit of insight thanks to the one and only James Gunn.

In Gunn’s Instagram story, one fan asked Gunn “What will Guardians of the Galaxy: Cosmic Rewind look like at Disney World?” Gunn replied with “Utterly mind-blowing. I mean it. You guys are going to freak out. It’s incredible.”

Another fan asked Gunn “Did you work on Mission Breakout at all? If so, how much were you involved? Do you like the ride?”

Gunn replied with “Yes. I consulted on it and directed the actors. Currently working on the ride opening in Orlando.”

Related: New construction photos show Guardians of the Galaxy coaster reaching for the stars at Epcot

Disney announced last year that an entire new reimagined EPCOT will be coming soon to Disney Parks. The process has already slowly begun with the debut of the EPCOT Experience last October as well as with construction throughout the park. However, with the current global pandemic and temporary closures, construction was halted at the parks.

When speaking about the reimagined EPCOT, Bob Chapek stated “As we build upon its core mission of optimism and hope to inspire the world, the real will become fantastic and the fantastic will become real — in whole new ways at EPCOT.”

Disney Parks Blog describes the upcoming Guardians of the Galaxy themed attraction as:

With the “Guardians of the Galaxy”-inspired coaster, we’re going big. This one-of-a-kind family attraction will be one of the world’s longest enclosed roller coasters when it’s added to Future World at Epcot. It’ll feature a unique story currently being created by Walt Disney Imagineering and include a new innovative ride system that’s guaranteed to “wow” guests.

Building an adventure this big will require a ride system and ride vehicles unlike anything our guests have experienced before. What guests will encounter can best be described as a one-of-a-kind storytelling coaster that connects the adventure of a storyline with the thrills of a coaster.

Guardians of the Galaxy: Cosmic Rewind is set to open in time for the 50th anniversary at Walt Disney World Resort in 2021.

Are you excited for the debut of Guardians of the Galaxy: Cosmic Rewind in EPCOT? Let us know in the comments.