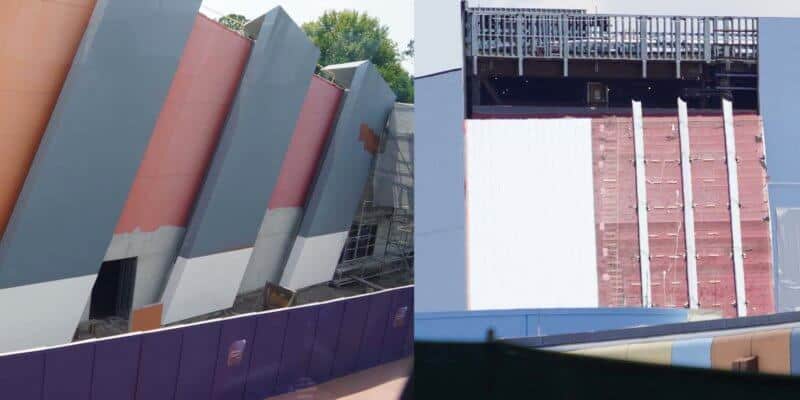 The Guardians of the Galaxy coaster coming to Walt Disney World’s Epcot is still shooting for the stars as construction continues on what is said to be the world’s largest indoor roller coaster.

The new images shared on Twitter by user @Bioreconstruct, show the current condition of the exterior of the ride’s attraction building, which is still well into its construction phase. Pictured below, this all-new building will house the roller coaster upon its completion. However, right now the company is working on the building’s roof.

Roofing continues over ascent into the back building of Guardians of the Galaxy. Same blue, catching a lot of sun here. pic.twitter.com/mvpIdO2eVm

The company finished installing the attraction’s ride tracks back in May and have since closed up the building, which leaves little for fans to get excited for as we all wait for more updates on the ride. But, we must say that it is still exciting to see that the ride is nearing closer to completion.

Sealing up the exterior of the front building of Guardians of the Galaxy. pic.twitter.com/CjXmVURJlY

See below that a fairly decent amount of work is still remaining to complete the ride’s pre-show/queue building (the old Universe of Energy attraction.) For a quite a while, this building sat lifeless and gutted as all of its insides had been removed and all that was left was construction debris and metal beams

Current work on side of Guardians of the Galaxy. pic.twitter.com/SH14s5INzb

Construction safety signs at back of Guardians of the Galaxy preshow building. pic.twitter.com/sCYLfHtKcN

Little has been said about the attraction by Disney since last November, when Bob Chapek, Disney Chairman of Parks, Experiences and Consumer Products, revealed the attraction’s ride vehicles during a breakfast panel at IAAPA 2018. Themed after the colors from the star-craft the Guardians use to journey through the galaxy in the famous film, the ride vehicles feature an electric blue base with vibrant neon secondary colors of yellow, orange and silver.

Chapek also revealed the revolutionary new way the ride vehicles will travel along the indoor coaster’s track. “This will be a coaster unlike anything you’ve ever experienced before. We call it a storytelling coaster. But on this attraction, each individual cab will be programmed to direct your eye to the story happening around you. Instead of whizzing by the action, you’ll be fully immersed in the story from the minute you launch,” said Chapek.

Guardians of the Galaxy and Spaceship Earth have more friends in the skyline. Tall building at center is JW Marriott Bonnet Creek. Directly below, Riviera Resort. pic.twitter.com/Ye77Dn1A5x

You can rocket through the galaxy with everyone’s favorite Guardians when this ride premieres at Epcot in 2021, during the 50th anniversary of Walt Disney World Resort.

What are your thoughts on the current construction status of the Guardians of the Galaxy roller coaster coming to Epcot? Let us know in the comments below!

All images of the construction of the Guardians of the Galaxy attraction featured in this article are from Twitter user @Bioreconstruct.