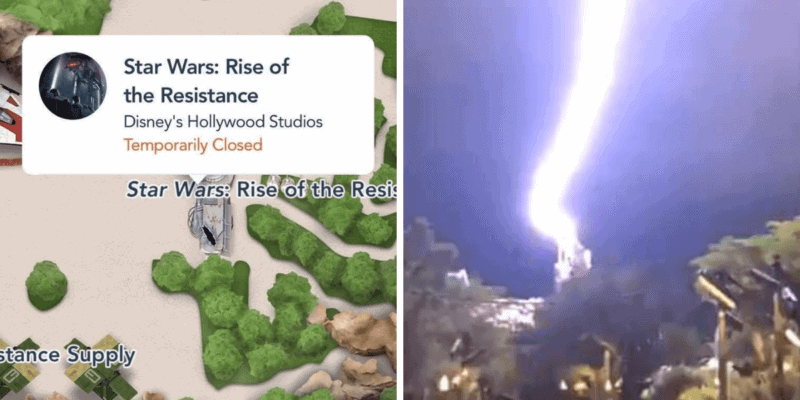 Reports are now coming in that Rise of the Resistance will remain closed for the rest of the day. There is still no word on what caused the closure or if the attraction will reopen tomorrow. Inside the Magic will continue to update you as we get information.

News: Rise of the Resistance in Disney World has been closed all day after being struck by lightning last night

Star Wars: Rise of the Resistance is one of the most popular rides at Disney’s Hollywood Studios inside Walt Disney World ever since it first opened. The attraction includes technology that has never been used before (including trackless ride vehicles) and it is utterly mind-blowing to say the least.

However, after a wicked storm hit Walt Disney World, it looks as though the popular attraction at Galaxy’s Edge has remained closed. You can see the lightning strike from ABC News in this tweet below.

Lightning struck one of the mountain peaks in Galaxy's Edge in Disney's Hollywood Studios in Orlando, Florida, lighting up the night sky. https://t.co/whPSgcpYNI pic.twitter.com/AKSe34HVob

Rise of the Resistance has been temporarily interrupted ever since this morning. According to WDW Stats on average an interruption for this Star Wars attraction takes 117 minutes.

People on social media are currently speculating that the excessive lightning from the storm struck a generator and that may be the cause of the ride’s extended downtime. However, nothing is for certain and Disney has not yet released a statement regarding the excessive downtime of Star Wars: Rise of the Resistance or if it is relating to lightning damage.

Inside the Magic will keep you updated as we learn more information.

Related: Cause of Disneyland Fire Revealed: Why a Fire Erupted at the SoCal Theme Park

We do know that the ride has been closed since early this morning and has not yet reopened.

More Information on Star Wars: Rise of the Resistance in Disney World

In case you aren’t familiar, this ride, located inside Star Wars: Galaxy’s Edge at both Disney World in Florida and Disneyland in California, requires a boarding group within its virtual queue system in order for Guests to ride the attraction.

Join the Resistance in an epic battle against the First Order on this exciting new ride.
Star Wars: Rise of the Resistance is a massive attraction with multiple ride systems that is unlike anything you’ve ever experienced at Walt Disney World Resort… or anywhere else in the galaxy!

If you don’t know how to join a boarding group, check out our video tutorial here:

Have you ever ridden Rise of the Resistance? Let us know in the comments below.