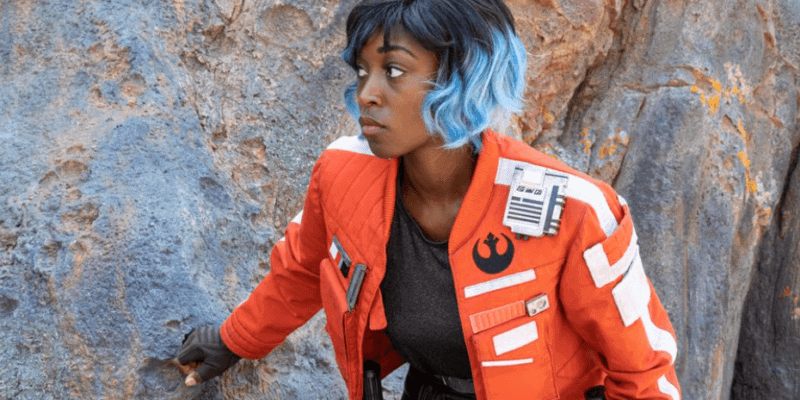 Star Wars: Galaxy’s Edge is the most immersive land you can ever experience in a Disney Park. So it’s no surprise that Black Spire Outpost has its own set of characters that occupy it. Other than Rey, Chewbacca, Kylo Ren, and countless Stormtroopers, there’s another new character you can encounter at Star Wars: Galaxy’s Edge: the rebel spy Vi Moradi.

You’ve probably always wanted to be selected as the rebel spy whenever you ride Star Tours. But Vi Moradi actually IS the rebel spy. When you have the chance to visit Batuu, be sure to keep your eye out for a blue-haired young woman roaming Black Spire Outpost and looking rather suspicious. That new character is Vi Moradi, a spy for the Resistance who was sent to Batuu by none other than General Organa herself. Like Rey and Chewbacca, Moradi is currently gathering recruits and finding reinforcements for the Resistance on Black Spire Outpost, and she spends her time hiding from Stormtroopers and sneaking around the area, looking for anyone and everyone who may be a rebel like herself. When you visit Star Wars: Galaxy’s Edge, you may even get to see Moradi in a stunt-filled encounter for the First Order. We won’t tell you how their skirmish ends, but this is one thing you won’t want to miss on your visit.

Moradi is, in fact, canon with the “Star Wars” story, and like Rey and Kylo Ren, she exists within the current trilogy of “Star Wars” films. She was first introduced in Delilah S. Dawson’s 2017 novel “Phasma,” and you can read even more about her in Dawson’s latest novel “Galaxy’s Edge: Black Spire,” which will give you more insight into Star Wars: Galaxy’s Edge when the book hits shelves August 26. Here’s Moradi’s backstory, as it is written on the official “Star Wars” website:

After devastating losses at the hands of the First Order, General Leia Organa has dispatched her agents across the galaxy in search of allies, sanctuary, and firepower—and her top spy, Vi Moradi, may have just found all three, on a secluded world at the galaxy’s edge.

A planet of lush forests, precarious mountains, and towering, petrified trees, Batuu is on the furthest possible frontier of the galactic map, the last settled world before the mysterious expanse of Wild Space. The rogues, smugglers, and adventurers who eke out a living on the largest settlement on the planet, Black Spire Outpost, are here to avoid prying eyes and unnecessary complications. Vi, a Resistance spy on the run from the First Order, is hardly a welcome guest. And when a shuttle full of stormtroopers lands in her wake, determined to root her out, she has no idea where to find help.

To survive, Vi will have to seek out the good-hearted heroes hiding in a world that redefines scum and villainy. With the help of a traitorous trooper and her acerbic droid, she begins to gather a colorful band of outcasts and misfits, and embarks on a mission to spark the fire of resistance on Batuu—before the First Order snuffs it out entirely.

Be sure to have a chat with Moradi (without exposing her to the First Order, of course) on your next visit to Batuu, and let us know how she’s doing as a spy for the Resistance. We’re sure it’s not easy to evade Stormtroopers every day.

What do you think of Vi Moradi, the newest character roaming around Star Wars: Galaxy’s Edge?