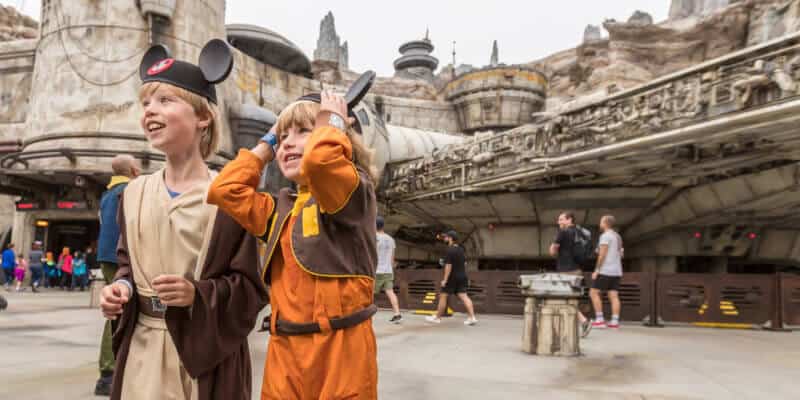 All Star Wars fans have been going out of their minds with all the new offerings premiering with Star Wars: Galaxy’s Edge at Disneyland. Yet, it seems as much as guests are immersed in the world of Star Wars in the land, they’re not allowed to dress the part and here’s why!

Technically, guests aged 14 years or younger are allowed to dress up as Ewoks, Kylo Ren, and Rey. However, anyone over this age is strictly forbidden and for some, it does take away a little bit of the magic that comes with being transported to the edge of the galaxy in Black Spire Outpost. Although, we know it’s for good reason.

When it comes down to it, the Disney Parks want guests to have the most fun and safe time possible when experiencing any of its themed lands and the only way to do this is to keep the identification of cast members as clear as possible.

As we all know, the Cast Members in Star Wars: Galaxy’s Edge are who guests go to for answers to questions, to take photos, and maintain the illusion of Galaxy’s Edge fictional planet. These people are put in place for park guests to trust and if someone came into the land with a convincing enough outfit, this would completely shatter this connection.

All it takes is one person to cause trouble and ruin the visit of a guest’s trip to the other-worldly land. If anyone could dress up as the Star Wars characters or in outfits similar to Cast Members, they could give guests bad information, whether it’s as simple as where Oga’s Cantina sits in the land or as extreme as what to do in the case of an emergency.

However, just because you can’t completely dive in head first to full cosplay mode of your favorite Star Wars character, it doesn’t mean you can’t pay homage to them in your park outfit through Disneybounding! For those not familiar with the term, it’s the building of an outfit with the combination of everyday pieces in the color palette of a Disney character’s most iconic look.

In an example, take a look at some of our favorite Disneybounding looks from real guests to the Disney Parks!

When good and evil are friends #disneybounding #kyloren #rey

Am I the droid you’ve been looking for???? One of my favorite parts of the Star Wars films are the droids. I WAS SO HAPPY WHEN I SAW R2D2 IN THE DROID SHOP! He moves and interacts with you AND EVERYTHING; it was a literal dream come true. I’ve always wanted a droid, and I didn’t get one in this trip to Batuu, but perhaps next time?? • SWGE is encredibly breathtaking and immersive. I honestly did not feel like I was in @disneyland but actually in a Galaxy far, far away. Also, Batuu is HUGE. It took quite a while to get around the whole land, and honestly there’s so much to look at and so much detail in everything that I guarantee there will always be something new to discover. I can’t wait to go back to Batuu?Do you have any questions, or anything you want to know? • ?:: @disney.jen • • • • • • • • • • @disneystyle @thedisneybound #swge #batuu #starwars #starwarsland #r2d2 #droid #disneyfriendsclub #disneyoutfit #disneyootd #americanstyle #endlessmagic #featuremydisney #disneybound #disneybounding #disneystyle #disneyside #disneyfashion #fashion #fashionblogger #style #styleblogger #ootd #outfitideas #instacute #dressedindisney #styledbymagic #fandomfashionista

What are your thoughts on not being allowed to wear Star Wars costumes in Star Wars: Galaxy’s Edge? Let us know in the comments below!