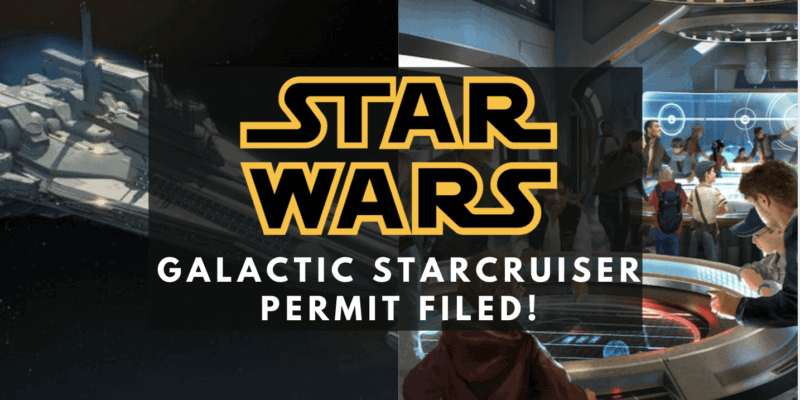 What all Walt Disney World Resort construction was halted in mid-March, Disney Park fans had no way of knowing what projects would be delayed or even scrapped altogether.

A new permit for set installation was just filed in Orange County, Florida and paid for by Walt Disney Imagineering Contract Accounting.

The permit, which lists Argyle, New York based Adirondack Scenic, Inc. as the contractor for the Disney construction project, states that it is for “Fabrication and Installation of Sets.”

So far, we know the Galactic Starcruiser experience will be an immersive, multi-day adventure that will last 2 days and 2 nights. Disney World’s official page for the upcoming Star Wars experience states that The Halcyon (the name of the ship) is a “glamorous starcruiser known for exotic expeditions in a galaxy far, far away.”

With multiple area, including launch pods where Guests will enter The Halcyon, the Atrium, the Bridge, and the all-ages Silver C Lounge, there are numerous sets that need to be built and installed before Disney’s Galactic Starcruiser hotel can open in 2021.

The only known “stop” on The Halcyon’s journey is Batuu. Guests who pay for this immersive Star Wars experience will get to visit Star Wars: Galaxy’s Edge at Disney’s Hollywood Studios. If the artist renderings are any indication, fans can expect to interact with characters like Chewbacca throughout their 48-hour excursion to the Outer Rim.

We can’t wait to see the continued progress on this exciting Walt Disney World construction project. The new permits for Galactic Starcruiser construction to continue are great news for those who are looking forward to returning to the Disney theme park in Florida.

If the current timeline for the Star Wars Disney Resort holds true, Guests will be able to make reservations later this year.

The skilled team at Academy Travel can help you plan the perfect Walt Disney World vacation. Stay ahead of the game and prepare for your next visit to the Magic Kingdom, EPCOT, Hollywood Studios, and Disney’s Animal Kingdom now.

The Authorized Disney Vacation planners at Academy Travel can even keep you up-to-date on the latest Star Wars Starcruiser updates so you can make sure you’re onboard for its maiden voyage. Click here to book your next Disney vacation!

Are you going to book a trip on The Halcyon? Tell us what part of this new Disney World hotel you’re most excited about in the comments!