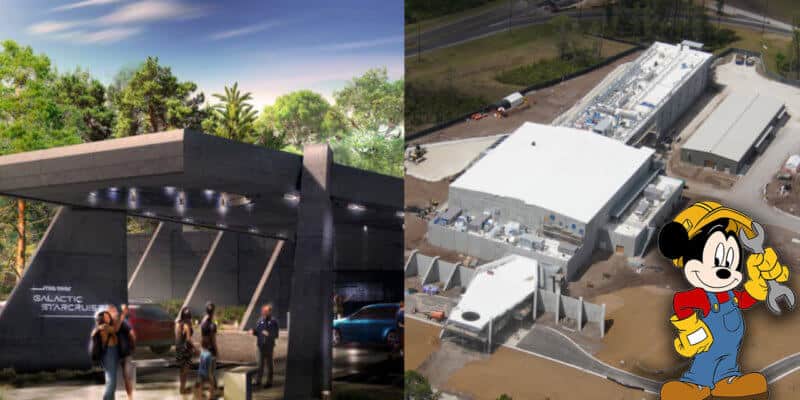 Construction at Walt Disney World might have been halted due to the current pandemic. However, new photos from Twitter user @bioreconstruct show an update of Walt Disney World’s upcoming Star Wars: Galactic Starcruiser hotel continuing on its interstellar journey to completion. The new images show the exterior construction of the Starcruiser, which seems to be right on track for its galaxy-shattering premiere in 2021.

The new photos show a completed drive-up entrance to the hotel’s lot, which expands all the way up to the resort’s space-themed “Galactic Starcruiser Terminal.” This is where guests enter to embark on a high-speed transit in a launch pod, which sends visitors up to The Halcyon ship.

In this side view of the property below, we see the driveway’s connection to The Halcyon’s (the spaceship) part of the hotel, which is where guests traveling by transport ships (bus) will make their arrival at the hotel.

As we previously shared, guests staying at the hotel will have special access to themed transport ships that will take guests to Batuu at Disney’s Hollywood Studios during “spaceport of call.” This special time will be part of the immersive space-themed stay at the hotel as it will be included on each guests’ itinerary during their visit.

As pointed out by @bioreconstruct below, as far ahead as the construction is on the exterior of the hotel, the sparse land located around the perimeter of the building is yet to see the installation of a thick forest. This will aid in hiding “The Halcyon” spaceship so that the “Galactic Starcruiser Terminal” portion of the building will be what’s most majorly visible.

Current aerial views of Star Wars Galactic Starcruiser (hotel). All the bare dirt will become thick forest to hide the building. Guests check in and are transported into the ship and the Star Wars timeline for 2 fully immersive days and nights. With excursions to planet Batuu. pic.twitter.com/5L4L2GM2x7

When this immersive two-day experience premieres at Walt Disney World, it will include a vast amount of Star Wars-themed entertainment offerings. Some of which, including time for guests to visit “The Bridge,” where guests can operate the ship’s navigation and defense systems under the crew’s guidance and “Wield a lightsaber,” which will let guests put their lightsaber-wielding skills to the test in an all-new interactive experience.

This is all, in addition, to even more out of this world dining and entertainment offerings, which will all be available exclusively to guests aboard The Halcyon.

Will you be planning a stay aboard The Halcyon when it premieres at Walt Disney World in 2021? Let us know in the comments below!

All images of the construction of the Star Wars hotel featured in this article are from Twitter user @Bioreconstruct.