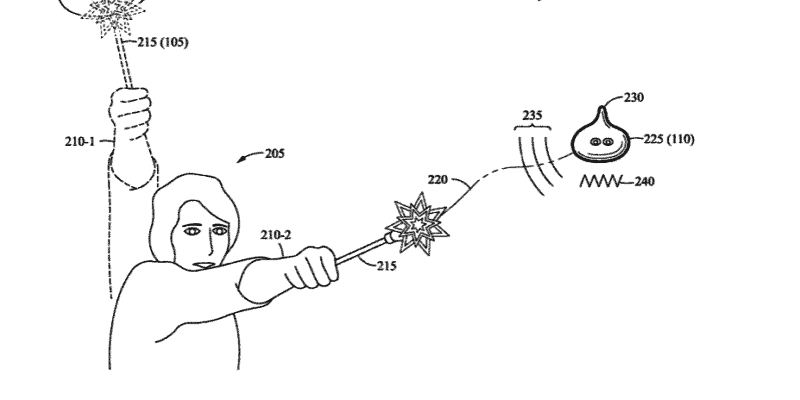 The Walt Disney Company is at it again, bringing guests new technology like they’ve never seen before in the Disney Parks. A new patent says that Disney is developing an interactive device that will produce audiovisual effects. Here are the details.

The latest development feels a bit like deja vu. Similar to the wands used at Universal’s Wizarding World of Harry Potter, Disney’s “interactive device with multiple antennas” is essentially a magic wand with an antenna that signals another device to react with an audiovisual effect. We’ve seen this technology used in the Harry Potter-themed lands at Universal Orlando and Universal Studios Hollywood, so given Disney’s desire to give guests the most immersive experiences possible, we’re not surprised that they are developing this project — it sure does feel like a step up from the Sorcerers of the Magic Kingdom interactive cards!

Take a look at the diagram below, as well as the description:

The patent then goes on to describe ways in which the user can move the magic scepter in order to cause other effects, such as “charging” the scepter, “illuminating,” “shooting,” and more.

At the time of this article’s publication, we’re not sure what this technology will be used for. It could be for a magic wand used in Fantasyland, or it could be indicating that Disney is developing interactive lightsabers to be used in the Galactic Starcruiser, the all-new cruise-hotel hybrid experience opening at Walt Disney World Resort in 2021. While the Star Wars fans in all of us are really hoping we’ll be getting interactive lightsaber fights or training simulators (which could be pretty likely, given the concept art released for the new Starcruiser, as seen below), at this time it’s too soon to tell. But we’re definitely excited to find out!

You can read the full patent here.

What do you think of the new technology Disney is developing? How do you hope it will be implemented? Let us know in the comments!