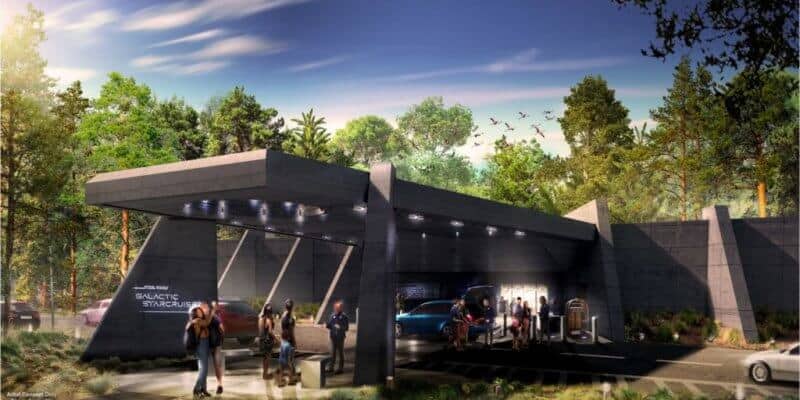 Walt Disney Imagineering has just announced that Star Wars: Galactic Starcruiser will begin welcoming Guests to a galaxy far, far away in 2021, and fans couldn’t be more excited!

The all-new immersive experience will be one unlike any other hotel so far at the Walt Disney World Resort–one that only the geniuses and creative masters of Walt Disney Imagineering could unveil.

When Guests book a stay aboard Star Wars: Galactic Starcruiser, there will be a two-night minimum stay. The experience will include a cruise-style itinerary during which Guests can become heroes in their very own Star Wars adventures.

The new experience promises to immerse Guests in the Star Wars world from the moment they check in until the moment they check out. This rendering created by Disney’s Imagineers gives Guests a bit of an idea about what the experience will be like when they first arrive for their new adventure. The “Galactic Starcruiser Terminal” is where Guests will begin their Star Wars-inspired experience.

Guests can arrive at the Galactic Starcruiser via Disney transportation, their own personal vehicle or even by landspeeder. No matter how they arrive, curb-side check-in will get Guests off on their adventure immediately! From the terminal, Guests will enter a launch pod to travel to the Halcyon, the starcruiser in the galaxy far, far away.

A “spaceport of call” will include Black Spire Outpost where special passenger transports accompany Guests to the planet of Batuu, made popular by the all-new Star Wars: Galaxy’s Edge land at Disney’s Hollywood Studios.

This amazing new experience keeps Guests immersed in their very own Star Wars adventure. It’s like a hotel and a cruise combined. There’s not a moment Guests of the Galactic Starcruiser and the planet Batuu won’t be in their story! We can’t wait!

Are you planning to book a “starcruise” aboard the all-new Star Wars-themed Galactic Starcruiser when Disney begins accepting reservations? What are you hoping the new hotel will include? Let us know in the comments section below.