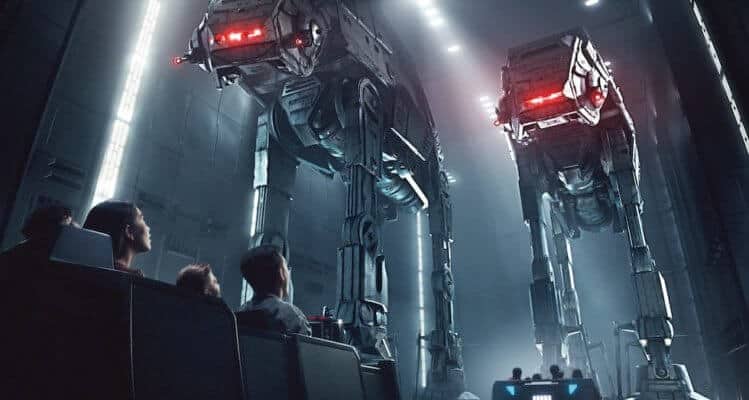 Ever since Star Wars: Galaxy’s Edge opened in May of this year at Disneyland in California, fans of the galaxy far, far away have been enjoying all there is to see and do as they tour the planet Batuu.

Since May, fans have been enjoying the blue milk and green milk that Luke Skywalker enjoyed in the Skywalker Saga, and they’ve also been training on the legendary Millennium Falcon.

But one thing Star Wars fans haven’t gotten to experience yet is the all-new Rise of the Resistance attraction, slated to open at Disneyland in January 2020 and at Walt Disney World next month. Fans have heard a few scant details here and there about the awesome new ride that’s sure to take the Star Wars experience at Galaxy’s Edge to a whole new level, but a new commercial for the attraction just released by Disney gives fans more exciting insight into the ride than ever before, and the crowds are going wild!

The new advertisement shows scenes inside what looks like a First Order detention cell aboard a Star Destroyer.  The scene shows 16 visitors who appear to be trapped inside the cell as the evil Kylo Ren activates his red lightsaber. From the new commercial, fans get a sense that rides will come up against an audio-animatronic version of Kylo Ren. (That should be simultaneously horrifying and thrilling!)

The Rise of the Resistance attraction will also feature holographic appearances by characters that Star Wars fans know from the latest Star Wars trilogy (we’re really hoping to encounter our favorites like BB-8, Poe, and Rey). Kylo will make several appearances throughout the attraction, so if you’re fearful of the evil Ben Solo, just cover your eyes!

Set during a dangerous off-planet mission, the exciting new attraction will also feature a combination of four ride experiences and will place Guests right in the middle of a battle taking place between the evil First Order and the Resistance. New recruits will be captured aboard a Star Destroyer. Then they will break out of a detention cell held by the First Order, escape from Kylo Ren, and race back to a top-secret base located on the planet of Batuu, where all of Star Wars: Galaxy’s Edge is set.

As Guests enter the ride, they will hear First Order officers shouting orders to “Move along” and referring to them as “Resistance Scum.” As Guests continue to make their way further into the attraction, they will be divided into smaller groups before being placed into detention cells. The cells are similar in appearance to the one Poe Dameron was in during The Force Awakens as he was being interrogated by Kylo Ren. Riders will also have the experience of being interrogated by the evil Kylo Ren.

Then riders will bust out of their cells and board a pair of 8-passenger ride vehicles before enjoying the rest of the attraction.

Take a look at the TV spot below:

The first Rise of the Resistance TV spot is out. It has the DL opening date but no WDW?

Probably nothing or time to get the Disney tin foil hats back out. pic.twitter.com/p67rHQH5MT

The new Rise of the Resistance attraction opens at Walt Disney World on December 5, but Guests at Disneyland will have to wait until January 17 for the thrilling encounter with Kylo Ren.

Have you already visited Star Wars: Galaxy’s Edge and the Planet Batuu? Or have you beein waiting for the new Rise of the Resistance attraction to debut? Let us know in the comments section below.