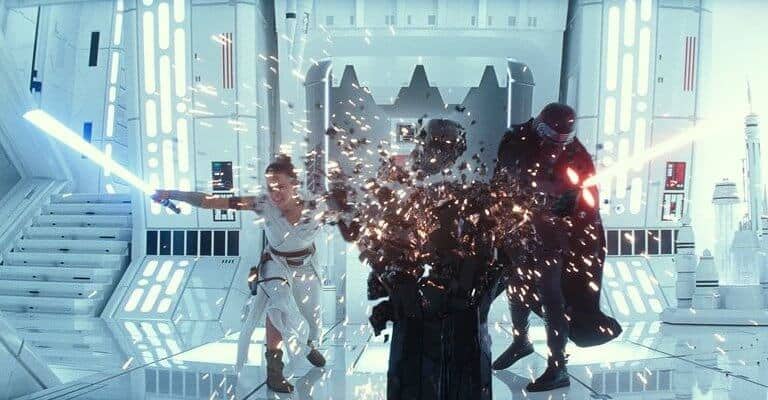 When Disney released the final trailer for Star Wars Episode IX: The Rise of Skywalker last week, many Star Wars fans picked up on something instantly. In one scene from the upcoming film, Kylo Ren and Rey are unified in fighting against something — or someone?

There’s no doubt the latest trailer released for the final episode of the Skywalker Saga has been drumming up fan theories from the moment it dropped last Monday night, as trailers for certain film franchises and sequels often do. Recent examples include the fan theories set into motion by the teaser trailers for Toy Story 4 and Frozen 2.)

But Disney doesn’t make it a practice to confirm or deny these theories. However, this time, Disney has apparently made an exception.

During the October 23 episode of The Star Wars Show on the brand’s official YouTube channel, Star Wars fans got confirmation that Rey and Kylo Ren are indeed joining forces to destroy Ren’s shrine to his grandfather, the original Dark Side villain, Lord Vader. (Somehow Vader’s helmet survived the horrific fire of Endor.)

But the meaning behind this scene that has yet to be confirmed, and even more fan theories and prophecies abound.

And scores of fans of the nine-part saga think the scene suggests that Kylo Ren will finally turn from the Dark Side and join the Resistance. Why else would he even consider destroying his Vader shrine? And recall that both his mother, Leia, and Rey make mention of Ben Solo’s potential to do good and to be good in previous episodes, paving the way for an ultimate redemption.

Others, however, ascertain that J. J. Abrams would have had quite the uphill battle (no pun intended) to bring about redemption for Ben Solo, given all the death and destruction he has caused over the course of his lifetime. Then again, if the evil Vader was afforded a redemption, a redemption is equally plausible for the only child of Han Solo and Leia.

Well the only child of Han Solo and Leia that we know of. But that’s a subject for a different article.

If Kylo Ren is to turn from his evil ways, what will his conversion look like? And if he begins to embrace the Jedi Light Side, what role will he play in taking down the First Order—his own? Will he kill the uber-confident and self-absorbed General Hux?

It’s still over a month and a half until the release of The Rise of Skywalker, so for now, fans will have to pass the time by developing new and better theories and prophecies.

What do you think? Will Kylo Ren (Ben Solo) be redeemed in the upcoming movie? What do you think we will learn about Rey? Let us hear your prophecies and theories about Star Wars heroes and villains and be sure to share with us your thoughts about the upcoming film in the comments section below.

Comments Off on Rey and Kylo have a common foe in “Rise of Skywalker”? Disney says yes