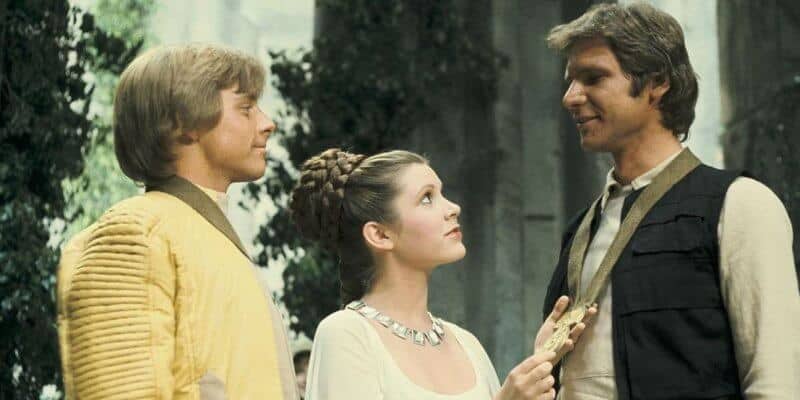 At last month’s D23 Expo, we learned enough details about the upcoming ninth installment of the Skywalker Saga to fill the Death Star. But perhaps one of the most interesting and, quite frankly, touching things that we learned is that Director J. J. Abrams plans to include Princess Leia in his upcoming film, “Star Wars: The Rise of Skywalker.”

After all, Leia is a Skywalker, and Abrams–along with a myriad of Star Wars fans–felt it only fitting (and probably a bit necessary) to bring Luke’s sister into the film.

How exactly Abrams intends to do that is still part of the mystery that we will have to wait until December to unravel. Fans of the franchise have been mourning the loss of Carrie Fisher since her untimely passing in December of 2016.

But while we wait for the theatrical release of the highly-anticipated Skywalker film, it’s interesting to think about ways in which the film might give the Princess a fitting send-off. Here are a few things that might happen in the movie–just speculation, but fun nonetheless.

Leia talks Kylo Ren down from the Dark Side

In “Star Wars: The Force Awakens,” Han Solo tried his darnedest to persuade his son to step out of the Dark and into the Light. He was unsuccessful, as Kylo Ren instead murdered his father rather than making any kind of a change. Perhaps his mother might have better luck. Aren’t mothers the nurturers? Maybe Leia can finally persuade Kylo Ren to turn his back on the Dark Side. It surely would position Leia in a well-deserved place of honor. After all, such a scene would meet Abrams’ promise to deliver an ending to the film “with scale, but with intimacy.”

A massive funeral for Leia held in Naboo

Abrams also mentioned that he’d be using footage from “The Force Awakens” that didn’t make it into the movie in order to build Leia’s story in “The Rise of Skywalker.” We don’t know exactly what that means, but some fans think perhaps an opening scene will include the understanding that the Princess has died, and instead of showing her passing, the film may instead show a massive memorial service for her. We think that’d be great–one in Naboo with every imaginable Star Wars character there to pay his or her respects.

Poe Dameron could give his life for Leia’s

Poe doesn’t play by the rules. And Leia is the only one who has ever seemed to appreciate his unorthodox ways and even to encourage them. Though Vice Admiral Holdo wouldn’t be moved, perhaps Abrams can include a part of the story in which Dameron sacrifices himself for General Leia. It could work.

The beginning of a new journey–for Kylo Ren

We know that the Princess is more than likely going to either die in the film or the understanding will be that she is dead. But maybe before she goes, her son has a change of heart all on his own. Perhaps she is ill and her death is imminent, causing him to realize what he had all along, what might have been, etc. Could Ben Solo actually receive a redemption similar to the one Vader had many moons ago?

Leia gets one last moment with Han Solo and Luke

Since “The Rise of Skywalker” is the end of the Skywalker era, we think it’s only fitting that the three main heroes–Princess Leia, Han Solo, and Luke Skywalker–have one final moment on-screen together. Obviously, it would be either CGI-rendered, or it could even be a flashback (yes, it’s got to be  at least one part flashback), but ending the saga without such a moment of togetherness might ruin any “scaled but intimate” ending Abrams has promised.

If you’ll think back, “Return of the Jedi” ends with all of Luke Skywalker’s mentors–in their ghost forms–standing together and smiling at him after the Endoran victory celebration. Wouldn’t it be great for Leia to take her place among those mentors, perhaps after a massive celebration of the final destruction of the First Order? We think so too.

How do you think Leia should be honored in the final Skywalker film? Let us know in the comments section below.