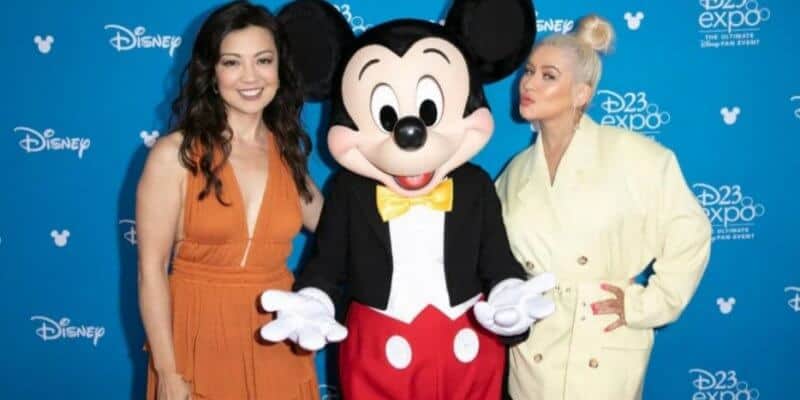 It’s not the Emmys. It’s not the Grammys. In fact, it’s not an awards show of any kind. But this weekend’s D23 Expo in Anaheim saw its share of red carpet royalty, and we’ve got the best of it right here.

The 2019 D23 Expo began on Friday and ran through Sunday. It was a star-studded event attended by Disney fans from all over the world. Secrets were revealed, very interesting costumes were donned, and surprises were uncovered on a continual basis for three consecutive days. If all the news, surprises, and Disney reveals weren’t enough to put you on overload, just look at some of the Hollywood royalty who had a part in the Expo. (And this is just a fraction of them!)

The Ladies of “Maleficent: Mistress of Evil”

Looking fabulous as always were Angelina Jolie, Michelle Pfeiffer, and Elle Fanning at the D23 Expo to promote the upcoming “Maleficent: Mistress of Evil,” due in theaters October 18, 2019. Jolie reprises her role of Maleficent, the villain from Disney’s “Sleeping Beauty.” Fanning is back as Princess Aurora and Pfeiffer plays Queen Ingris.

Chris Pratt and Julia Louis-Dreyfus were at the Expo to celebrate of Pixar’s “Onward,” the story of two teenage elf brothers who set out on a journey to find out if there’s enough magic left in the world that would afford them one more day with their father, who died when they were too young to remember him.

The Ladies of “Star Wars: The Rise of Skywalker”

Daisey Ridley (Rey) and Keri Russell were also at the D23 Expo to promote the ninth and final installment of the Skywalker Saga, “Star Wars: The Rise of Skywalker,” set to hit theaters just before Christmas this year. The official trailer for the film was released on Saturday during the Expo, and we get a sense of doom with teasers hinting at Rey’s darker side.

The Voice Cast for Pixar’s “Soul”

Questlove, Daveed Diggs, Tina Fey and Phylicia Rashad stopped by the D23 Expo to promote Pixar’s upcoming film, “Soul,” directed by Pete Docter (“Inside Out”). Jamie Foxx (not pictured) also lends his voice to the film which is set to come to theaters on June 19, 2020.

Emily VanCamp reprises her role as Sharon Carter, aka “Agent 13” in “The Falcon and the Winter Soldier,” which will be part of the Marvel content on Disney’s new streaming service, Disney+.

Atwell made a surprise appearance at the D23 Expo on Friday to announce that she would be voicing her character, Peggy Carter, for Marvel’s animated series, “What If…”. Atwell has extensive Marvel titles on her resume and we’re glad Marvel has found a way to bring her back into the Marvel Universe.

Even canine comrades Monte and Rose were at the D23 Expo to promote the upcoming live-action remake of Disney’s “Lady and the Tramp,” which comes exclusively to the Disney+ streaming service on November 12.

It wouldn’t be a D23 Expo red carpet without “Star Wars” representation from droids R2D2 and BB-8 dressed in their metallic, rust-free best. Both were on site at the Expo to celebrate all the reveals and news about “Star Wars” and the upcoming opening of Star Wars: Galaxy’s Edge at Walt Disney World.

Disney revealed details on one of its newest projects called “Raya and the Last Dragon.” Awkwafina was at the Expo to promote the new film about a lone warrior from the kingdom of Kumandra who sets out on a quest to find the Last Dragon and bring peace back to the kingdom.

The vocal talent behind the lovable Olaf from “Frozen” and the soon-to-be-released “Frozen 2” stepped out at the D23 Expo to celebrate the upcoming November 22 theatrical release of the icy sequel.

Five of the luminaries honored at the Disney Legends Ceremony during the D23 Expo were Ming-Na Wen, Christina Aguilera, Diane Sawyer, Robin Roberts, and Robert Downey Jr. Each was named a Disney Legend for his or her contribution of magic, creativity, and imagination.

The Rock and Emily Blunt came out on stage at the D23 Expo to tell everyone about their new movie, “Jungle Cruise,” inspired by the Disneyland and Disney World attractions of the same name. “Jungle Cruise” rows into theaters July 24, 2020.

Who were you most excited to see on the red carpet at the D23 Expo? Which movie or series are you most looking forward to?