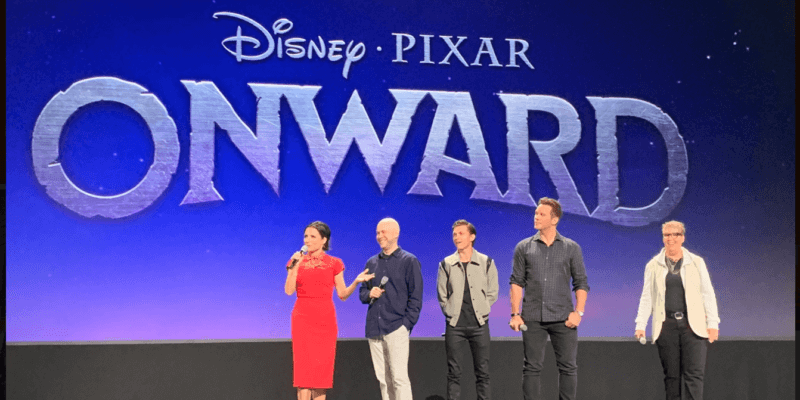 If the perfect movie family could ever exist, it looks like Pixar has found one that’s pretty darn close. Late this morning, Chris Pratt, Tom Holland, and Julia Louis-Dreyfus took the D23 Panel stage to share a little bit about Pixar’s newest original movie, “Onward.”

In times of old, the world was magical…but times change. Watch the new trailer for #PixarOnward and see the film when it cometh to theaters March 2020. pic.twitter.com/zbm2StdrFS

The chemistry between these three cannot be more promising, especially since this is probably the closest we will get to a Starlord/Spider-Man buddy movie.

Check out the exclusive poster & still from #PixarOnward that just debuted at #D23Expo. See the new film starring @tomholland1996 and @prattprattpratt in theaters March 6, 2020. pic.twitter.com/9FVgUts3Y2

“I do feel like Tom is like a little brother to me,” Pratt commented, “and it’s really cool to see that reflected in this movie.”

“You know, we get to do a Pixar movie, which is awesome,” Pratt said, “but to be able to do that and share that with someone you love… that’s really cool and kind of amplifies the experience.”

Julia Louis-Dreyfus was the last one introduced and added, “It was really fun to play an elf mom of these two bozos here.” This will be Louis-Dreyfus’ second Pixar movie, lending the voice to Princess Atta.

However, these three characters are not without loss. Their father passed away before Ian was born, and their mother has raised these two boys on her own. As these two brothers embark on a quest to find real magic left in this fantasy world, Ian’s one wish is to have one chance to actually meet his dad.

“It’s based on my experiences growing up,” revealed the director and screenwriter Dan Scanlon. “My brother and I lost our father at a young age. I’ve always wondered who my dad was and what he was like. Those questions became the road map of this film.”

So, yeah, it’s a safe bet to say this is going to be another visually-spectacular emotional roller coaster like every other Pixar film before it.

D23 attendees were also treated with new concept art AND up to 8 MINUTES worth of exclusive movie content.

BREAKING: Some Brand-New Concept Art For #PixarOnward Are Shown In This Video! (via @danthepixarfan) ?✨ pic.twitter.com/lnrP2W36kQ

But this session ended on a hard note with Tom Holland taking a moment to go from Pixar to Marvel to give what sounds like a final goodbye. “Everyone, listen,” he said, “it’s been a crazy week, but I want you to know that I love you from the bottom of my heart and I love you 3000.” Holland left the stage immediately afterward. At least fans have the chance to see this future Disney Legend one more time.

Are you excited for Onward? Let us know in the comments.

Comments Off on Pratt, Holland, and Louis-Dreyfus discuss playing a family in Disney/Pixar’s “Onward”