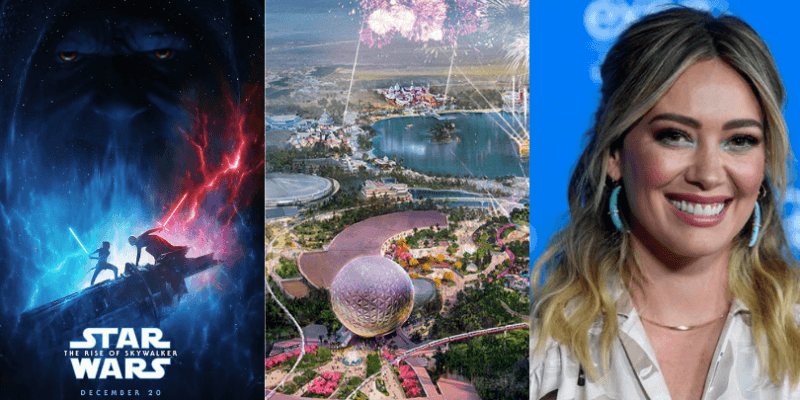 D23 Expo is the ultimate Disney fan event, and this year was not short on major announcements from The Walt Disney Company. From Disney Parks updates to all the new movies to get excited about and even some pretty major reveals about Disney’s new streaming service, Disney+, there was a lot to be excited about all weekend long.

In case you weren’t attending the expo or you were unable to keep up with every piece of breaking news that dropped throughout the weekend, we got you covered. Here are the biggest announcements that came from D23 Expo 2019.

The first big reveals from D23 Expo weekend came from the Disney+ panel. We learned even more about the shows and movies that we already expected, but Disney also revealed some awesome news about new projects that we didn’t even know were in the works, like a “Lizzie McGuire” sequel series, the confirmation of an unnamed series following Obi-Wan Kenobi, a “Phineas and Ferb” movie, and an all-new Christmas film starring Anna Kendrick and Bill Hader.

We also found out some pretty awesome news about the shows coming to Disney+. Disney announced that the shows on Disney+ will be released weekly. This means that those who are used to binge-watching content on Netflix are in for a bit of a rude awakening since you’ll have to wait for new episodes of these new Disney+ series every week. We have also learned, that unlike Netflix, Disney+ will allow their subscribers to stream multiple devices at the same time!

In addition to getting sneak peeks of what’s coming to Disney+, Disney fans also got special looks at the upcoming films from Walt Disney Studios, including both live-action and animated Disney films, two new Pixar projects, and what’s to come from Marvel and Lucasfilm. Fans were excited to finally get a release date for the currently untitled sequel to “Black Panther,” as well as some more details about “Star Wars: The Rise of Skywalker” (with an epic new poster and film footage that the internet is still buzzing about).

A good portion of the Walt Disney Studios presentation was focused on the animated films that so many fans have been anticipating. We got 8 full minutes of sneak peeks for Pixar’s “Onward,” a first look at Pixar’s “Soul,” more information about “Raya and the Last Dragon” (including news of Awkwafina in a lead role), and of course, “Frozen 2” news (with the reveal that Kristoff will propose to Anna in the new movie). There was so much to take in during the Walt Disney Studios panel, but overall, “The Rise of Skywalker,” “Frozen 2,” and “Cruella” are what the internet is talking the most about.

The best panel of all was on day three of the expo: the Disney Parks, Experiences, and Products panel! This is the one Disney fans were waiting for all weekend, and rightfully so. While we didn’t get a ton of big reveals that many Disney Parks enthusiasts were hoping for, we did get some more information about what’s to come at Disney Parks around the world, as well as a few announcements that came out of left field for those who least expected them.

First, we’re getting a Mary Poppins-themed attraction at the United Kingdom pavilion in Epcot’s World Showcase. This news is huge, especially considering the historic aspect: not only is Mary Poppins a character who multiple generations have emotional ties to, but also this is the first-ever Mary Poppins attraction in a Disney Park. We know hardly anything about the attraction, but everyone’s excited, to say the least.

Next, we found out even more details about an Epcot overhaul, including the reimagining of Spaceship Earth, three new lands replacing Future World, a Moana attraction, and so much more.

We also found out that Disney California Adventure is getting an E-ticket attraction (in addition to the Spider-Man ride) in the upcoming Marvel-themed land called Avengers Campus. The E-ticket attraction won’t be opening for a while, but fans were definitely intrigued by the concept art.

Another big reveal from Disney included the announcement of the name of the fifth ship in the Disney Cruise Line fleet, the Disney Wish. We even got more information about what’s going on at the international Disney Parks, including the addition of a “Frozen”-themed roller coaster at Hong Kong Disneyland. And of course, who could forget Disney’s announcement of a new partnership with Target, where they plan to open miniature Disney stores inside Target stores nationwide.

There was so much announced at D23 Expo 2019, and these are only just the highlights. Stay up to date with Inside the Magic for all the latest Disney news from D23 Expo and beyond.

Which of these big reveals from D23 Expo 2019 are you most excited about? Let us know in the comments!