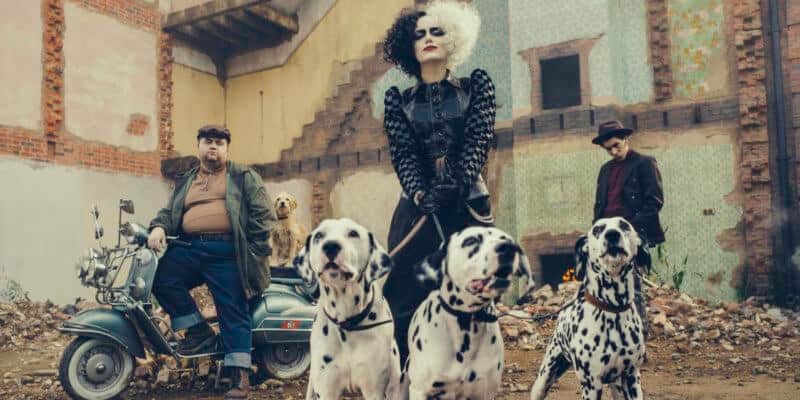 It’s official–we just got our first look at Emma Stone as Cruella de Vil in Disney’s “Cruella.” In a new image released during the Walt Disney Studios presentation at D23Expo this morning, we see a vicious and fur hungry version of the famous actress.

The new image, pictured below in a Tweet by D23, shows the actress with a rock-n-roll and edgy look as she sports a leather getup with both black and white teased hair. The image shows Cruella posted up in a spooky back alley with a few Dalmatians and her henchmen, which will be played, Paul Walter Hauser and Joel Fry.

During the announcement and reveal of the new image, Walt Disney Studios shared that shooting has already begun for “Cruella.” In fact, shooting starts today in London.

The presentation also included a video interview featuring Emma Stone. In it, Emma described the film as having a “punk rock” vibe. The new movie will follow Cruella in her “early days,” giving a look at “What made Cruella so cruel?”

Disney has not revealed much about the live-action film since first confirming the project in December 2018.

“Cruella” was originally set to be released during the 2020 Christmas holiday season. However, the film got pushed back to 2021 due to what is believed to be scheduling conflicts. Disney’s change in plans is likely because of the release of Stephen Spielberg’s “West Side Story, which is due to hit theaters on December 18, 2020, just 5 days before the projected release of “Cruella” on December 23. Releasing these two films back to back could theoretically cause one film to overshadow the other, lessening the films’ best revenue-earning potential.

What are your thoughts on this edgy and punk rock version of Emma Stone as Cruella de Vil? Let us know in the comments below!