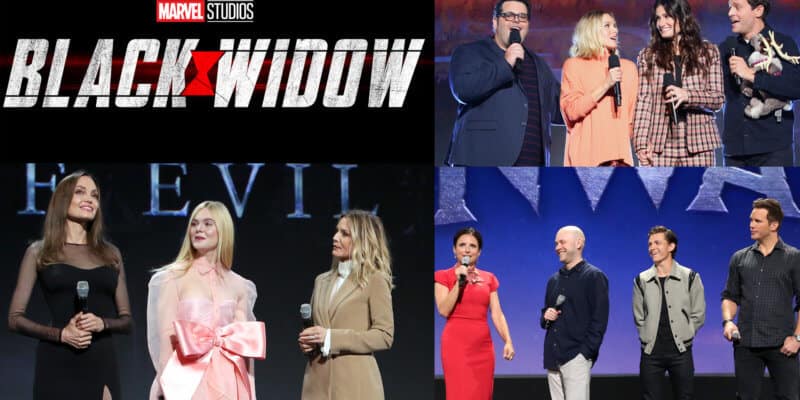 D23 Expo 2019 has already shared a mass of exciting news from The Walt Disney Company. And in their recent Walt Disney Studios presentation, studio leaders and filmmakers from Lucasfilm, Marvel Studios, Disney Live-Action, Pixar and Walt Disney Animation Studios revealed even more exciting news–including an exhausting list of exciting new details of some of Disney’s most anticipated films over the next few years.

After the otherworldly news of Star Wars was revealed, Kevin Feige (president of Marvel Studios) took the stage. He was joined by Ryan Coogler, the director and co-writer of “Black Panther”. Together, the two revealed the exciting news of “Black Panther 2” (working title), which is set to hit theaters May 6, 2022.

This was followed by news of Marvel Studios’ “The Eternals.” To deliver the news, Feige invited cast member from the highly-anticipated film on stage, including Richard Madden, who portrays the all-powerful Ikaris; Kumail Nanjiani, who plays cosmic-powered Kingo; Lauren Ridloff, who portrays the super-fast Makkari, the first deaf hero in the MCU; Brian Tyree Henry, who plays the intelligent inventor Phastos; Salma Hayek, who plays the wise and spiritual leader Ajak; Lia McHugh, who portrays the eternally young, old-soul Sprite; Don Lee, who plays the powerful Gilgamesh; and Angelina Jolie, who stars as the fierce warrior Thena.

When the cast came on stage, Feige revealed concept images of each of them and announced three new cast members and their characters: Gemma Chan, who plays humankind-loving Sersi; Kit Harington, who was cast as non-Eternal Dane Whitman, and Barry Keoghan, who portrays aloof loner Druig. “The Eternals” is set to open in U.S. theaters on Nov. 6, 2020.

Feige concluded the Marvel Studios portion of the presentation with updates on “Black Widow.” The Marvel Studios president shared a pre-recorded greeting featuring Scarlett Johansson, David Harbour and Florence Pugh. The audience also got an exclusive look at the upcoming film.

For this portion of the presentation, Sean Bailey (President of Walt Disney Studios Motion Pictures Production) took the stage and guided guests through all-new upcoming releases from the studio. This journey through the company’s upcoming films began with “Jungle Cruise,” which included a special appearance by the film’s stars Dwayne Johnson and Emily Blunt. The two helped share trailers of the new film to the audience.

Bailey then welcomed Angelina Jolie back to the stage to present exclusive footage and details of Disney’s “Maleficent: Mistress of Evil.” The two were soon joined by other stars from the film, including Elle Fanning, Michelle Pfeiffer and Chiwetel Ejiofor.

Bailey next introduced Niki Caro to the stage (director of the upcoming live-action “Mulan” film). While on stage, Caro expressed her passion for the project and then proceeded to share several minutes of footage from the film. The film is set to release on March 27, 2020.

After sharing footage of the fierce adventure film, Bailey shared new details about “Cruella,” an upcoming feature film starring Emma Stone and Emma Thompson. As part of the presentation, a video of Emma Stone was shared to fans as the actress was on the London-based set of the film. This was followed by a never before seen image of Stone as Cruella in an all-black leather get-up with white and black hair.

Next, Pixar Animation Studios’ Chief Creative Officer Pete Doctor came on stage to take the audience through Pixar’s upcoming film slate of original movies. Doctor began with next summer’s release, “Soul.” The new film will journey from the streets of New York City to the never before seen cosmic realms and “The You Seminar,” the fantastical place where we all discover our unique personalities. 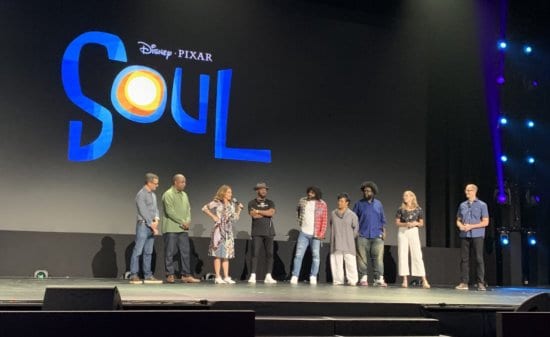 Doctor was then joined by Producer Dana Murray, co-director/writer Kemp Powers and writer Mike Jones on stage. Together, they revealed a sneak peek to the audience. Then, they revealed members of the voice cast who joined them on stage, including Ahmir Questlove Thompson, Phylicia Rashad, Daveed Diggs, Tina Fey and Jamie Foxx. Disney and Pixar’s “Soul” opens in U.S. theaters on June 19, 2020.

Doctor next introduced director Dan Scanlon and producer Kori Rae on stage, who shared details and more than ten minutes of exclusive footage from Pixar’s upcoming feature film “Onward.” The movie stars Tom Holland and Chris Pratt as two teenage elf brothers, Ian and Barley Lightfoot, who embark on an extraordinary quest to discover if there is still a little magic left in the world.

After revealing the footage, Holland, Pratt and Julia Louis-Dreyfus—who voices Mom in the movie—joined the filmmakers on stage—much to the delight of the audience, who all received an exclusive “Onward” poster. The movie is set to open in theaters on March 6, 2020.

The movie follows Raya, a lone warrior from the fantasy kingdom of Kumandra who teams up with a crew of misfits in her quest to find the Last Dragon and bring light and unity back to their world. After discussing the film’s premise, the group shared three minutes from the movie. Then, two newly announced members from the film’s voice cast took the stage: Awkwafina (Sisu) and Cassie Steele (Raya).  “Raya and the Last Dragon” opens in U.S. theaters on Nov. 25, 2020.

It was then announced that the crowd would be receiving exclusive “Frozen 2” posters, which was followed by never before seen footage of the new characters, including a scene that featured wood as Iduna singing to young Elsa and Anna. The song, “All Is Found,” is one of seven all-new original songs by Kristen Anderson-Lopez and Robert Lopez. Then, the audience saw a sequence from the movie that showcased Elsa’s yearning for answers about the past, culminating in another song, “Into the Unknown.”

In an epic finale to the Walt Disney Studios presentation, the film’s cast, including Menzel, Bell, Groff, and Gad came on stage to perform the new song “Some Things Never Change,” which brought the audience to its feet.

Which of these exciting announcements was your favorite from the Walt Disney Studios presentation at D23? Let us know in the comments below!