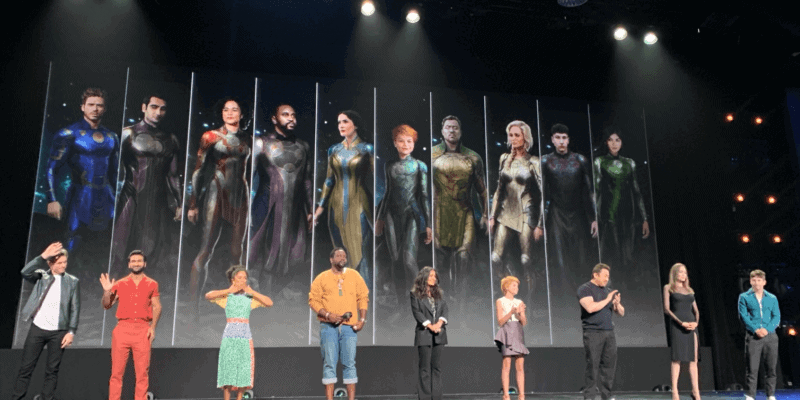 One of the most talked-about installments of Marvel’s Phase 4 finally has shown its cast to the world, and one of the biggest rumors of the weekend has now been confirmed in the flesh. Kevin Fiege returned to the D23 Panel stage this morning accompanied by the new cast of “The Eternals” with each hero standing in front of a massive portrait of themselves in their costumes.

A closer look at the cast of Marvel Studios’ THE ETERNALS on stage at the #D23Expo pic.twitter.com/bTSkoXh6xI

The cast includes Angelina Jolie as Warrior Athena, Gemma Chan as Sersi, and Kit Harington as Dane Witman/Black Knight.  But Kit Harington isn’t the only man of Westeros moving into the MCU. He will also be joined by his former cast member Richard Madden. Madden will be dawning the role of Ikaris.

These four iconic actors stand alongside a cast that includes “The Walking Dead” actress Laren Ridloff who will be playing Makkari–the MCU’s first deaf superhero–and Salma Hayek playing a gender-swapped interpretation of the team leader, Ajak.

The cast of Marvel Studios’ The Eternals takes the stage at the #D23Expo pic.twitter.com/TR1gYEEq1w

The Eternals were created by the Celestials 35,000 years ago to protect the earth, and the series creator Jack Kirby was inspired by Greek and Roman mythology when creating these characters. After seeing who Marvel Studios has picked, it’s hard to think of how it can get any better.

Marvel has already unveiled a plethora of material promising to expand their cinematic universe further and further, and this latest unveiling comes right after announcing more information about “Black Panther 2” and an even deeper look into the “Black Widow” upcoming standalone movie.

“We’ve pulled back the cosmic curtain on the MCU in ways you can’t imagine,” said Feige as he boasted his incredible cast. Marvel’s “The Eternals” will be directed by Chloe Zhao. It is still scheduled to hit theaters in November of 2020.