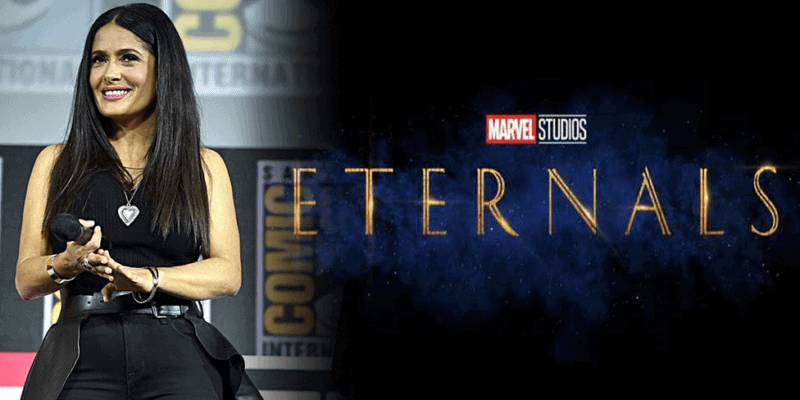 Marvel Studios just announced that Salma Hayek has joined Angelina Jolie and the rest of the star-studded cast of “The Eternals.” Here’s what we know so far.

It looks like the Marvel Cinematic Universe is expanding more than ever before. We can’t get enough female super heroes in Marvel films lately, so when we heard that Salma Hayek would be joining the Marvel team in a gender-swapped role, we knew we had to share the news. Hayek will play Marvel’s second Mexicana super hero, Ajak, who is traditionally portrayed as male in the comics. If you aren’t familiar with “The Eternals,” they are are “a group of immortals who have been on Earth for 35,000 years,” as described by Marvel Studios president Kevin Feige. Created by The Celestials, the Eternals were sent to earth to protect humanity from The Deviants. Hayek’s character, Ajak, is their leader, and we couldn’t think of a more confident, strong individual to lead a team of super heroes like The Eternals.

Hayek shared a heartfelt reaction to her casting on Instagram in both English and Spanish: “I’m so excited to join the Marvel family as Ajak, the mother of all Eternals. It used to be the father of all Eternals, but girls… this is OUR time!!!! Estoy muy emocionada de añadirme a la familia Marvel como Ajak la madre de todos los Eternos. Antes era el padre de todos los Eternos, pero chicas… ESTE es nuestro momento!!!!”

Hayek is the second Mexicana super hero for Marvel (the first being Natalia Cordova-Buckley, who plays Elena “Yo-Yo” Rodtiguez in “Agents of S.H.I.E.L.D”), but this isn’t the first gender-swapped role Marvel has announced. We found out earlier this week that Lauren Ridloff, a deaf actress, was cast to be Makkari, a traditionally male character. Marvel Studios truly has been making strides when it comes to representation, casting a Mexicana leader of super heroes, a deaf actress in a traditionally white male role, and even announcing who will be the first openly LGBT+ character in an upcoming Marvel film.

We’re going to have to wait until next year to see Hayek in action in “The Eternals,” which is part of Phase 4 of the Marvel Cinematic Universe. For now, we’ll be waiting patiently for the film’s official trailer to drop (hopefully sooner than we anticipate).

What do you think of Marvel’s decision to cast Salma Hayek as Ajak, leader of The Eternals? Let us know in the comments!