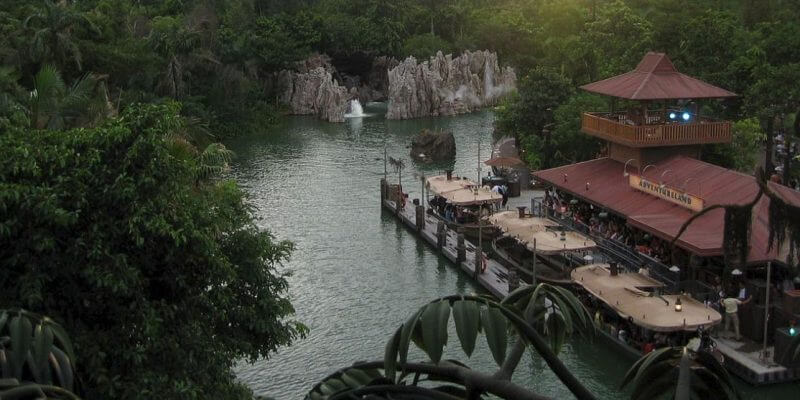 Initially intended to be a serious jungle experience, mirroring Disney’s “True Life Adventures,” this river cruise is one of the original attractions found at California’s Disneyland when it opened in 1955. It would remain relatively calm and true to its original intent for seven years before comedy was added to the spiel.

Around the time Disneyland opened in California, eight of Walt Disney’s original “True Life Adventures” live-action films had already been released. For his Disneyland theme park, Harper Goff, relying on inspiration from the Humphrey Bogart classic, “The African Queen,” and landscaper extraordinaire Bill Evans designed a guided water-based adventure across the exotic rivers of Africa, India, and South America. Original plans called for using live animals, but instead easier to control audio animatronics wound up peppering the path of this jungle journey.

Playful elephants, under the direction and design of Marc Davis, were added as part of a $7 million enhancement that also included Ganesha’s temple and nearby ruins. Adding more humor to the trek, the Davis designed scene showing soon to be skewered safari made its point.

Additional changes and enhancements have been made over the years, adding animals and thematic elements to make the experience the classic pun-filled adventure that it is today. “Indiana Jones Adventure” attraction allowed for minor alterations to the Jungle Cruise. These included adding a well-worn appearance to the 1930’s style tramp steamer that carries guests across the ride’s rivers and aligning the queue area to match the 1938 ambiance of the Indiana Jones attraction.

In recent years the exotic excursion has received a humorous holiday overlay for the Christmas season. Jingle Cruise festivities include holiday décor throughout queue areas and attraction’s path. Replacing the usual jungle jokes, a holiday heavy spiel adds to the festive fun.

The original pun peppered, perilous peregrination as it appears today.

Walt Disney World is home to the second version of this jungle jaunt. Distinguishing differences include a single story queue area, the tail end of a 1930’s airplane (front half used in the now extinct Disney Hollywood Studios Great Movie Ride), and the nearby Skipper Canteen, a Jungle Cruise-themed restaurant.

Here’s a happy holiday version of the Florida based voyage

Distinguishing this spectacular safari from California and Florida’s outpost style attractions is that the excursion departs from the same station as the Western River Railroad ride. Other differences include the attraction’s name, “Jungle Cruise: Wildlife Expeditions,” and mapped projection enhancements within the ruined temple.

Although similar elements exist in this excursion, it could almost be considered a different attraction, as it contains references to both “The Lion King” and “Tarzan.” Dueling deities and pyrotechnic effects ensure this attraction earns the “adventure” in Adventureland.

The exotic experiences at each of these far-flung Disney theme parks are both similar and unique at the same time. New adventures feature more intense and dazzling displays of imagineering, while older versions retain their classic charm. It will be interesting to see how many elements (if not all) of these diverse Disney attraction versions will appear in the forthcoming feature film based upon the Jungle Cruise.

Of these four exciting excursions, how many have you survived?  Which is your favorite?  Share your adventures about the backside of water and more in the comments below.