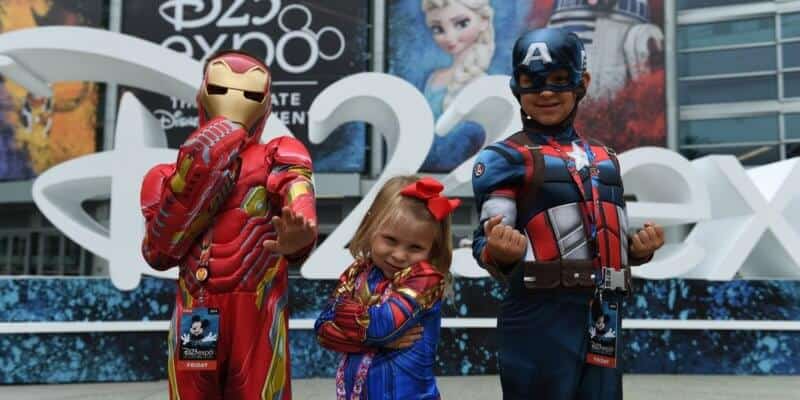 The 2019 D23 Expo was filled with joy, excitement, anticipation, and of course, announcements. We learned about all of the new tv shows and movies coming to Disney +, an exciting new “Moana” attraction, the official name for the super-hero land coming to Disney’s California Adventure, new sequels to hit films, such as “Black Panther 2,” and new details to highly anticipated films such as “Frozen 2” and the live action “Mulan.”

And who could forget about all of the new Disney Parks news that dropped on Sunday? An entirely new reimagined Epcot, a new parade coming to Disneyland, Walt Disney World’s 50th Anniversary, a brand new ship and destination for Disney Cruise Line, and that’s only scratching the surface.

But it wouldn’t be the biggest Disney event of the year without all of the die-hard Disney fans! All of the attendees brought their Disney best to this year’s expo, and we just had to share all of the beautiful, unique, and creative costumes with you.

Fans really brought it to this year’s Mousequerade presented by Raw Threads.

We all know and love Carl, Russell, Dug, and Kevin from Disney’s “Up.” Check out this “Up”-inspired costume who brought this Pixar classic to real life:

The fan-favorite candlestick from Disney’s “Beauty and the Beast” was also brought to life. From glided shoes to wax-like candle handles, completed with the perfect French accent.

As Rafiki says — “seta sana squash banana.” We are loving this look inspired by the iconic animated hit “The Lion King.”

And of course, we all know and love her from Marvel’s “Black Panther” — Shuri! (We think she looks spot-on!)

One villain that you will never ever be able to compete with, the sea witch. This stunning Ursula representation is like nothing we have ever seen before!

These lovely group of ladies showed off some true Disney magic when they transformed from beautiful princesses to spinning teacups.

And last, but certainly not least, the winner of the Mousequerade — The “Grim Grinning Gown”

The Mousequerade wasn’t the only place we saw costumes. Attendees roamed throughout Anaheim Convention Center all weekend strutting their stuff and we were able to snap a few images to share.

And my personal favorite – Check out this amazing fan-made, light-up pirate ship. (The pirate skull’s mouth on the back of the ship even moves and talks!)

Thank you to everyone who stuck with Inside the Magic throughout the 2019 D23 Expo weekend. And don’t forget, there is still time to enter our D23 Expo and Thomas Kinkade Sweepstakes for your chance to win a Limited Edition Aladdin painting from Thomas Kinkade Studios!

Which is your favorite D23 expo costume?