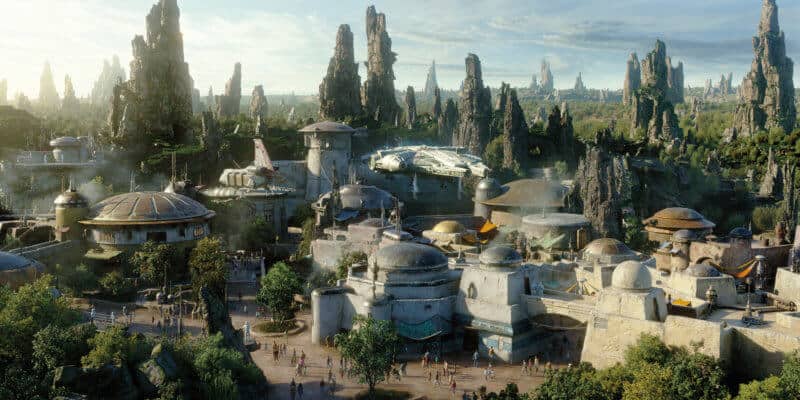 This is only the second annual “Greatest Places” list to be compiled by the 96-year-old news magazine, and the newest addition to Disneyland has only been open for just under 3 months.

In preparation for compiling its annual list, TIME Magazine accepted nominations for greatest places, including museums, hotels, parks, and restaurants, and then reviewed those places for quality, innovation, sustainability, originality, and influence–five commodities in large supply at Star Wars: Galaxy’s Edge at Disneyland.

TIME Magazine’s review of the new 14-acre land contrasts its futuristic environment with the nostalgia for which Disneyland has come to be known. The magazine was also impressed with the way in which Guests of Star Wars: Galaxy’s Edge are drawn into the planet Batuu–and instead of simply mingling with their favorite “Star Wars” characters, Guests have the opportunity to “live” among the planets inhabitants, visit Oga’s Cantina, and sample the iconic blue milk.

Visitors to the Planet Batuu can also train at the controls aboard a Millennium Falcon thanks to state-of-the-art flight simulation technology at Galaxy’s Edge, and later this year, Guests will have the opportunity to go on a cinematic journey at the Star Wars: Rise of the Resistance attraction. At trading posts on Batuu, visitors can even customize their own droids (at the Droid Depot) and show off their craftmanship in creating custom lightsabers.

Star Wars: Galaxy’s Edge opened at the Happiest Place on Earth on May 31, and just recently welcomed its one millionth trainee aboard the Millennium Falcon. On the East Coast, planet Batuu opens to visitors at the Walt Disney World Resort later this month, and the Floridian version of Galaxy’s Edge promises to be even more popular than its sister planet.

Is it any wonder the all-new Star Wars-themed land was awarded a spot on the list? The 5 key factors also happen to be hallmarks of Disney and have been since the beginning of the Disney empire.

What do you think of Star Wars: Galaxy’s Edge? Do you agree or disagree that it’s a must-see destination? Let us know in the comments!