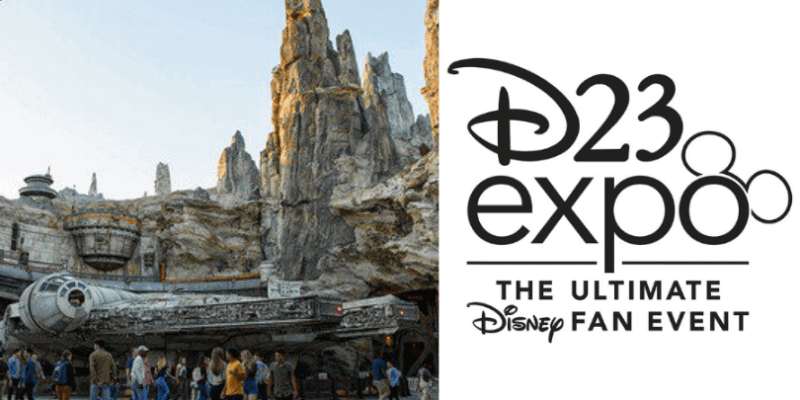 Of course, with all the buzz surrounding Disney+ lately, we have to start there. D23 Expo attendees will not only be among the first to get to sign up (and get an exclusive deal) for Disney’s new streaming service but they may also be able to get a sneak peek of “The Mandalorian” inside the Disney+ pavilion. “The Mandalorian” is the first live-action “Star Wars” television series and it’s highly anticipated among fans, so if we get a sneak peek of the new show during the Disney+ presentation over the weekend, it will be a pretty big deal.

With 2019 being the opening year for Star Wars: Galaxy’s Edge at Disneyland and Walt Disney World, we’re not surprised that there will be plenty of Batuu news at D23 Expo. One of the exciting presentations going on this weekend is Inspiring Women Behind Star Wars: Galaxy’s Edge, in which attendees can meet the women behind the magic of the new land, including Lucasfilm’s Vice President of Development Carrie Beck and other women who brought Galaxy’s Edge to life.

In addition to that presentation, we really hope to hear even more news about Star Wars: Rise of the Resistance, perhaps the attraction that fans are most excited to experience once it makes its debut in Florida this December and in California this January. We also hope to hear more about the land in general, including the behind-the-scenes details that make the magic happen.

Would it be a Disney fan event without a ton of amazing merchandise? “Star Wars” fans love merchandise (the $200 lightsabers are proof!), so we aren’t surprised that there will be plenty of fun souvenirs to purchase at D23 Expo. The official “Star Wars” website says that Sith troopers have infiltrated the expo and attendees will have the chance to purchase some awesome items ahead of their official product launch this September, so we’re definitely excited to get a peek.

There is so much “Star Wars” fun coming to D23 Expo, so below is the schedule for every “Star Wars”-related event happening at the expo this weekend.

The Music and Sounds of Star Wars: Galaxy’s Edge

Go Behind the Scenes with The Walt Disney Studios

Heroines of the Disney Galaxies, Presented by BoxLunch

Additionally, attendees can take a look at the Evolution of the Stormtrooper costume exhibit and “Star Wars” Kids activities at the Lucasfilm pavilion throughout the expo weekend.

Are you among the lucky “Star Wars” fans attending D23 Expo this weekend? Let us know what you’re most excited for in the comments!