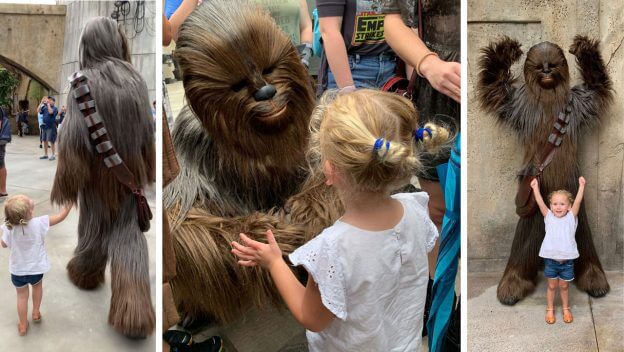 Fans of “Star Wars” young and old are gearing up for their trips to Batuu when Star Wars: Galaxy’s Edge opens later this month, and one of the youngest fans of this galaxy far, far away has already made some magical memories there.

Katie Grace, who will be turning 3 years old next month, recently joined her mom as her plus one during a Disney Cast Member preview day at Star Wars: Galaxy’s Edge. The newest expansion at Disney’s Hollywood Studios, Star Wars: Galaxy’s Edge is already creating happiness for Cast Members and annual passholders, and Katie Grace fit right at home with the other guests and “Star Wars” characters during her visit at the beginning of the month.

She was able to meet her favorite character while visiting Batuu and of course mom was right on hand to capture the moment as Katie Grace and Chewbacca shared laughs and hugs.

Can’t wait until August 29 to meet Chewie? His regular meet and greet location will continue to be located at Star Wars: Launch Bay–he just might make the occasional trip to Batuu aboard the Millennium Falcon!

In addition to walk-around characters, the land comes with a number of droids, like DJ R-3X, or Rex as he was known in his days of being a Star Tours pilot. He has since been reprogrammed and now resides on Batuu where he works as a DJ providing all the tunes for Oga’s Cantina.

Ready to start planning your trip to Star Wars: Galaxy’s Edge? Click here for a free Disney vacation quote from the Authorized Disney Vacation Planners at Academy Travel! The best part about booking with Academy Travel is that their services are totally free and they’re able to help with everything from finding the best deals on where to stay to helping you plan your reservations for dining and activities in Star War: Galaxy’s Edge.

What do you think of this adorable three-year-old’s meet-and-greet with Chewbacca? Which character are you most excited to meet yourself? Let us know in the comments!