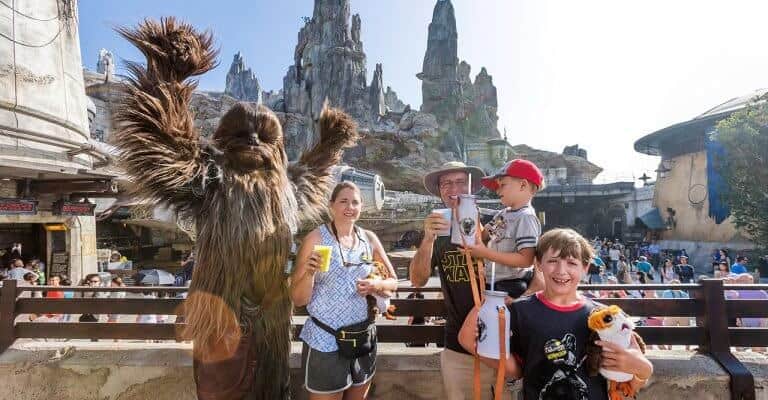 It’s not every day you get to pilot the fastest hunk of junk in the galaxy…or at least it’s pretty rare if you’re not a Disneyland annual passholder! One family got to visit Star Wars: Galaxy’s Edge this week and climb aboard Millennium Falcon: Smugglers Run, and an eight-year-old boy was named the attraction’s one-millionth rider.

Jonathan Ridgeway, who visited Disneyland with his family from the Mississippi city of Ocean Springs, had the amazing opportunity of piloting the Millennium Falcon. Little did young Jonathan know that he would be named the one-millionth rider! The eight-year-old was joined by his four-year-old brother, Logan, and his parents Becky and Roger during his time in Black Spire Outpost, and the entire family got to live out their wildest “Star Wars” dreams.

“It was really exciting,” Jonathan said.

After exploring the Millennium Falcon in the attraction’s queue, the Ridgeway family was greeted by none other than Chewbacca himself, as well as Disneyland Ambassador Justin Rapp, who congratulated Jonathan on being the one-millionth member to join Hondo Ohnaka’s flight crew and fly the Millennium Falcon. After their ride on the current most popular attraction at the Disneyland Resort, the family was gifted stuffed Porg plush souvenirs by several Star Wars: Galaxy’s Edge Cast Members, who clapped and cheered as the family exited the ride.

Later on, the family enjoyed complimentary Blue and Green Milk and toasted in celebration. You can take a look at Disney’s video of the Ridgeway family’s milestone flight below:

You too can join Hondo’s flight crew and fly the fastest hunk of junk in the galaxy at Star Wars: Galaxy’s Edge at Disneyland now, or at Walt Disney World after the land opens on August 29. If you’re interested in booking a trip so you can see for yourself what all the hype is about, contact Inside the Magic’s preferred travel agency, Academy Travel! The Authorized Disney Vacation Planners at Academy Travel can offer you expert advice on all things Star Wars: Galaxy’s Edge and provide you with a no-obligation quote on your dream vacation. Click here to get a no-obligation quote and discuss your vacation with a Vacation Planners at Academy Travel.

Have you had the chance to pilot the Millennium Falcon yourself? Let us know in the comments!