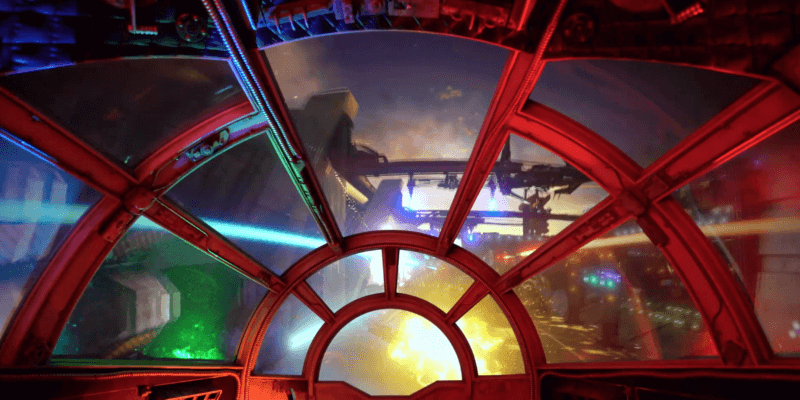 Millennium Falcon: Smugglers Run is one of the most sought after theme park attractions in the world as it is the first of two to premiere in Star Wars: Galaxy’s Edge, opening May 31 at Disneyland Park and Aug. 29 at Disney’s Hollywood Studios. The new experience combines immersive storytelling with interactive gameplay to let guests live out their own Star Wars adventure in a way never done before in the Disney Parks.

Most remember the Millennium Falcon from the “Star Wars” franchise films as a “piece of junk” or “bucket of bolts.” However, this ship is the most famous of all the Star Wars starships and now, guests 38 inches or taller, can climb aboard the ship to settle in its cockpit and take it for a spin!

This new experience follows the events of “Star Wars: The Last Jedi,” and the story goes that Chewbacca brought the Falcon to Black Spire Outpost for repairs. In exchange for some much-needed replacement parts, Chewie loans the Falcon to Hondo Ohnaka, a smuggler who is now making good use of it. This is where guests to the attraction’s story begins!

The attraction starts when guests enter into a room with Hondo Ohnaka, who explains to guests he is running a “legitimate business” out of the spaceport called Ohnaka Transport Solutions. He tells them he has more cargo than he can handle and needs extra flight crews to make some runs for him. Specifically, crews that won’t ask too many questions about the cargo or how Hondo got a hold of it.

This is when guests get to step aboard the iconic spacecraft. However, they don’t take flight just yet. Visitors enter the craft’s hatch onto its starboard airlock. Once aboard, star travelers can spend some time in the ship’s main hold and lounge, where they can sit at the famous Dejarik (chess) table, which is functional, or poke around at other equipment in the room.

After a short break in the hold, it’s time for the real mission to begin! Guests are moved through a hallway into the Falcon cockpit in groups of six, where they strap in. Each person is assigned one of three critical roles to complete their mission. Similar to Mission: SPACE at Walt Disney World’s Epcot, guests know it’s their turn to act during the experience when buttons light up in the cockpit.

The ship has two pilots, who both work together to steer the ship. The left pilot controls horizontal motion and the right pilot controls vertical motion — avoiding obstacles that could cause damage to the “bucket of bolts.”

These (2) crew members use blasters and missiles to defend the falcon and its precarious cargo. Gunners are also given the option to switch to manual targeting to create an even greater challenge!

Flight Engineers also have one of the most critical roles in the Falcon, keeping the falcon from falling apart on its mission by managing the ship’s systems, repairing any damage the ship encounters and taking control of the “special modifications” Hondo installed for these unusual missions.

Some of these modifications by Hondo include the altering of the control sticks for the pilot and co-pilot and the supplementation of the Falcon’s arsenal with a harpoon, among a few other tweaks.

During this experience, guests will see many stunning and super realistic visual effects created by Industrial Light & Magic (the visual effects division of Lucasfilm) in collaboration with Walt Disney Imagineering, who designed the ride’s gaming platform and interactive media.

The experience starts when the crew powers up the Falcon and make it jump into light speed. From there, Hondo Ohnaka (with occasional comedic input from Chewbacca) helps guide guests along with their mission.

If the Falcon sustains damage, such as smashing into obstacles or taking enemy fire, and is not properly repaired, the ship’s handling will become affected.

At the end of the mission, Hondo informs guests how well they accomplished their objectives. Similarly, each guests’ performance during the flight will follow them throughout the land. So we recommend trying your best because if you do a bad job you will hear about it as you continue your journey throughout Star Wars: Galaxy’s Edge.

Also, not only will you be the talk of the town if you mess up the Falcon during your flight, but the ship’s hallway will also show damage as you leave the attraction.

Are your going to take on Millennium Falcon: Smugglers Run when it opens at Disneyland this Friday? Let us know in the comments below!

Comments Off on INSIDE Millennium Falcon: Smugglers Run at Star Wars: Galaxy’s Edge