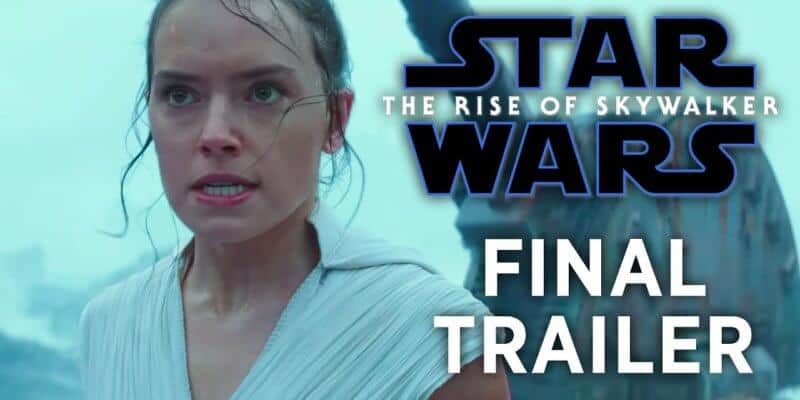 For Star Wars fans who’ve waited with bated breath for the final trailer for Star Wars Episode IX: The Rise of Skywalker to drop, the wait is finally over!

Tonight, on Monday Night Football on ESPN during half-time in the New England Patriots game against the New York Jets, the newest–and final–trailer for the film dropped. But if watching football’s not your bag, or if you didn’t tune in because you don’t watch the Patriots or the Jets, Inside the Magic has you covered. Check out the trailer here:

Anticipation and excitement have been building for the ninth Star Wars episode–perhaps more so than for any other installment of the Star Wars saga yet. Why? It could be because Star Wars: The Rise of Skywalker is the final piece to the Skywalker Saga, and many fans are curious about truths that will be revealed and loose ends (if any) that might be tied up. Fans of the saga are also anxious to see how Director J. J. Abrams makes good on his promise to honor Carrie Fisher’s memory in the final episode.

Fans of the Star Wars saga are also eager for the fall of the Dark Side, as the surviving Resistance faces the First Order one final time in the newest feature film that promises to end the Star Wars saga–42 years in the making–in a meaningful, cohesive way.

The saga began in June 1977 with the first film called Star Wars: A New Hope, in which Luke Skywalker teams up with an overly-confident pilot, a furry Wookiee, two droids and a Jedi knight to try their hands at saving the galaxy far, far away from the evil Empire and at saving Princess Leia from the clutches of the equally evil Lord Vader.

Though The Rise of Skywalker is the last installment of the so-called Skywalker Saga, the Star Wars brand is far from the end of movie-making and storytelling. Star Wars: The Clone Wars continues, and the newest Star Wars series, The Mandalorian is set to debut on the new Disney+ streaming service on November 12. The Mandalorian includes 8 episodes in its first season, and the second season of filming has already begun.

Another new series called Kenobi is also in the works.

Whether creator George Lucas ever dreamed the films about his fictional galaxy and all the characters within it would go on to become not only a wildly popular series of films, but also a staple in pop culture, we may never know. But what’s for sure is that the Star Wars saga will live on in infamy long after the curtains close on Episode IX.

Are you planning to see Star Wars: The Rise of Skywalker on December 20, the day it hits the box office? What are you most excited about when it comes to Episode IX? Let us know in the comments section below.