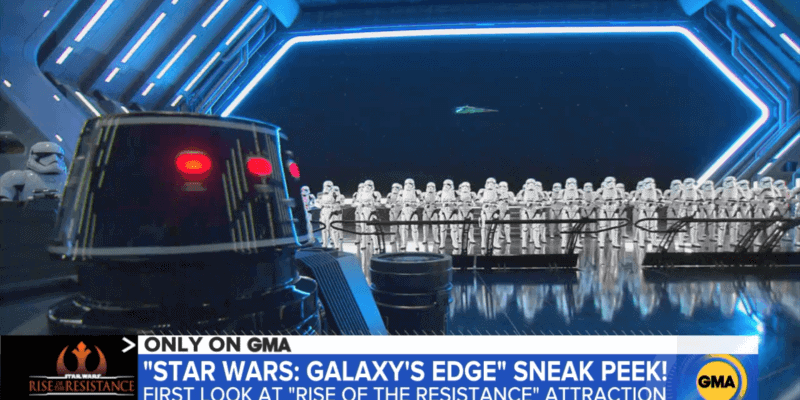 Whether you’re a huge fan of Millennium Falcon: Smugglers Run or you’re still waiting for the second attraction to debut at Star Wars: Galaxy’s Edge, you haven’t seen anything yet. It looks like Star Wars: Rise of the Resistance, possibly the most advanced attraction Disneyland and Walt Disney World have ever seen, will be over 15 minutes long.

Okay, so we haven’t experienced Rise of the Resistance for ourselves yet. But if you weren’t excited about this attraction to open before, that’s about to change. Everything we’ve heard up until this week has made this ride out to be nothing less than a spectacular experience. And after hearing more about it on television as part of Disney’s media blitz to promote Star Wars: Galaxy’s Edge, we’re even more eager to ride it than ever before.

During the television special that aired earlier this week in anticipation of Rise of the Resistance, Disney Parks, Experiences and Products Chairman Bob Chapek shared more information about what guests can expect when experiencing the latest “Star Wars”-themed attraction at the Disney Parks.

“Imagine being chased for 15 minutes by Kylo Ren and the First Order. Stormtroopers everywhere. Lightsabers coming at you,” Chapek said. “It’s going to be fantastic.”

While this isn’t a confirmation of exactly how long Star Wars: Rise of the Resistance is from start to finish, it does confirm what fans have been saying — this attraction is long. It was previously reported that some speculated that the experience is 28 minutes long, but we were unsure exactly how that number was estimated — and Walt Disney Imagineering has since confirmed that the attraction isn’t that long.

Now that Chapek basically confirmed that guests will experience the attraction for at least 15 minutes, we’re almost certain that Rise of the Resistance will be even more exhilarating than we thought possible. Plus, being chased by Kylo Ren for 15 minutes sounds pretty intense to us. We can last around 15 minutes on Pirates of the Caribbean and it’s a small world. But 15 minutes in the middle of “Star Wars” action? That sounds like a dream come true.

In case you’re not caught up with the latest Rise of the Resistance news, here’s what you need to know. The attraction opens in December at Disney’s Hollywood Studios. On the west coast, it will open in January. And if you’ve always wanted to join the Resistance and fight the First Order on the edge of the galaxy, this is your chance.

The attraction puts guests in the middle of a First Order-Resistance battle as though they are new recruits. You will be captured aboard a Star Destroyer, break out of a First Order detention cell, escape from Kylo Ren, and make your way back to the Resistance base on Batuu — hopefully unscathed.

Star Wars: Rise of the Resistance is touted as the most advanced, state-of-the-art attraction in a Disney Park, and by the sounds of it, it will completely take your breath away. “Star Wars” fans will love it because it stays true to the feeling of the films (with holographic and audio-animatronic appearances from characters like Rey, Poe, Finn, and Kylo Ren). Imagineering fans will love it for the technology, innovation, and story. And everyday guests will love it for the thrill it offers anyone who experiences it.

Star Wars: Rise of the resistance opens on December 5 at Disney’s Hollywood Studios in Florida and on January 17 at Disneyland in California. Interested in booking a trip to visit Star Wars: Galaxy’s Edge in time for the opening of this new attraction? Reach out to the Authorized Disney Vacation Planners at Academy Travel for a free, no-obligation vacation quote for the “Star Wars” vacation of a lifetime.

What do you think of the latest news about Star Wars: Rise of the Resistance being at least 15 minutes long? Let us know in the comments!