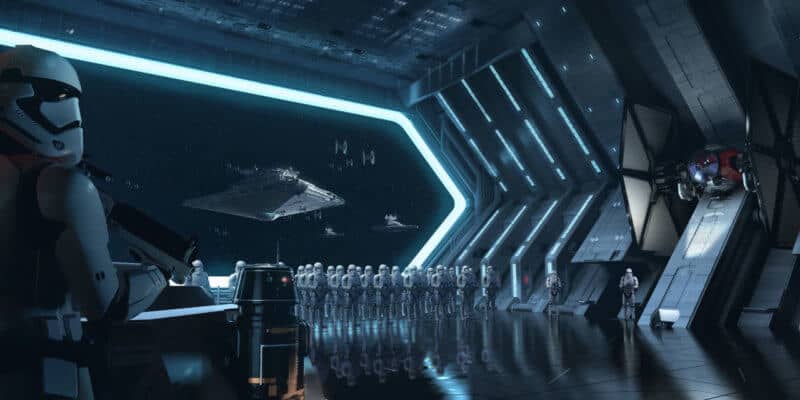 Buckle up, “Star Wars” fans. One of the newest Disney attractions could be a 28-minute experience.

We recently learned more details about the state-of-the-art technology behind the attractions and experiences coming to Star Wars: Galaxy’s Edge, the new, immersive lands opening at Disneyland this summer and Disney’s Hollywood Studios later this fall. And now, the latest information to come out about the epic lands reveals the possibility that one of the two attractions could be a whopping 28 minutes long.

Yes, you read that right. A 28-minute-long attraction could be coming your way, and no, it won’t be the highly anticipated Millennium Falcon: Smuggler’s Run. It turns out that Star Wars: Rise of the Resistance may be a 28-minute-long epic attraction complete with over 300 animatronics, says Theme Park Stop podcast host Alicia Stella. While this has yet to be confirmed by Disney, Stella has a reputation of being an reliable resource for theme park news. In her podcast, Stella cites permits and her own sources and gives a pretty convincing description of the attraction experience.

We know what you’re thinking: a 28-minute attraction? We know it may sound ridiculous, but think about it. The attraction is rumored to be 28 minutes long from entrance to exit. An experience most similar to this would be Flight of Passage in Pandora – The World of Avatar. Flight of Passage is known for having hours-long wait times, and the attraction itself hosts two pre-shows before guests even board the actual ride. While the ride itself is only a few minutes long, the attraction experience as a whole takes approximately 20 minutes, not including the time guests wait in the queue. A 28-minute-long attraction experience isn’t unheard of, but it is lengthy, perhaps to make the attraction worth it for guests who will be waiting hours in a standby queue.

In Stella’s podcast, she says that Star Wars: Galaxy’s Edge guests will board a transport that will take them into space and look through virtual windows revealing their journey to the Star Destroyer. Once aboard the trackless ride vehicle, riders will be taken as prisoners before they are rescued by the Resistance. Stella states that the ride vehicles will weave through two six-story AT-ATs while dodging laser blasts. The ride ends with a daring escape to the planet surface. Stella also mentions in her podcast that Star Wars: Rise of the Resistance is located in Disney’s largest building ever constructed for a dark ride.

Take a look at this ride vehicle image, which Stella cites in her podcast:

The information Stella shared in her podcast isn’t all we know about Star Wars: Rise of the Resistance. We previously learned details of the new attraction coming to Star Wars: Galaxy’s Edge after Barron’s got an exclusive preview tour of the new land.

According to Barron’s, the Star Wars: Rise of the Resistance queue will be made of rundown rooms the Resistance has repurposed as a base for operations against the First Order. “Groups of guests might be “captured” at one point and ordered along by the enemy, before making their escape aboard a trackless troop transport. They will see scenes including a Stormtrooper formation and one featuring Kylo Ren, perhaps resembling the interrogation scene from Star Wars: The Force Awakens.” As part of this transport, guests will evade war machines such as the AT-AT Walkers from The Empire Strikes Back.

These details don’t differ too much from Stella’s. As it turns out, it seems as through Stella’s details enhance what we already heard of the new attraction. As we mentioned, Disney has yet to reveal the length of either of the attractions coming to Star Wars: Galaxy’s Edge. But if a 28-minute-long attraction experience is coming our way, we wouldn’t mind. And we’re sure other “Star Wars” fans won’t mind, either.

Watch the official teaser trailer for Star Wars: Rise of the Resistance below:

What do you think of the latest rumor about Star Wars: Galaxy’s Edge?