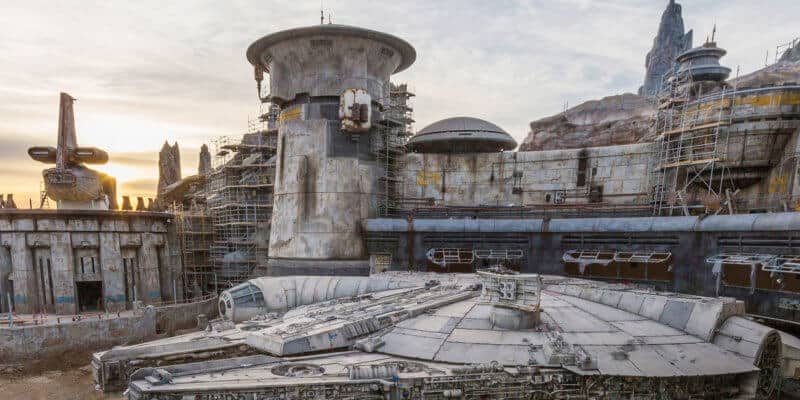 Barron’s recently spent an afternoon touring Star Wars: Galaxy’s Edge at Disneyland on a press tour and during their visit, learned new details of the coming land. Some of which, included a look at Millennium Falcon: Smuggler’s Run, Star Wars: Rise of the Resistance, Oga’s Cantina, and some of the shopping and retail experiences, which could include a retail center where Cast members haggle over prices with Dok-Ondar.

Star Wars: Galaxy’s Edge brings to life Black Spire Outpost on planet Batuu, which is said to be located near the outer limits of the Star Wars universe. And according to Barron’s, when Disney Imagineering was creating this land, they found inspiration from Morocco and Istanbul, focusing on small details.

When Imagineers journeyed to these foreign lands for inspiration, Barron’s reports that local guides who wanted to show off iconic sites would find the Disney team “taking pictures of, say, a door coming off its hinges…”

During their tour of the themed land, Barron’s learned that “building exteriors in Galaxy’s Edge are designed to look weathered from the first day of completion…” Visitors who have seen Harambe Market in the Africa section of Disney World’s Animal Kingdom, near Orlando, Fla., will find a similar attention to detail here, such as the way faint rust streaks flow down from the corners of metal grates.”

Barron’s reports that Millennium Falcon: Smuggler’s Run will follow the story of Hondo Ohnaka, a pirate, who has cut a deal with Chewbacca for the use of the Millennium Falcon. In the attraction, park guests will serve as the ship’s pilot. The experience will allow guests to see real-time results of their actions, including that of knocking over a spire during takeoff.

Barron’s reports that the flight will be different each visit. “After a ride, the visitor might, say, stop at Oga’s for a drink and be told something like, “The boss isn’t happy about how you brought the ship back.” This is part of an interactive, story-building experience throughout the land that visitors can opt in to or out of.

As part of their visit, Barron’s got a small tour of Star Wars: Rise of the Resistance, where they learned of the attraction’s queue, which will be made of rundown rooms the Resistance has repurposed as a base for operations against the First Order. “Groups of guests might be “captured” at one point and ordered along by the enemy, before making their escape aboard a trackless troop transport. They will see scenes including a Stormtrooper formation and one featuring Kylo Ren, perhaps resembling the interrogation scene from Star Wars: The Force Awakens.” As part of this transport, guests will evade war machines such as the AT-AT Walkers from The Empire Strikes Back.

Barron’s visit also included a tour of Oga’s Cantina, which they report to be “small for aesthetic reasons.” “To maximize capacity and keep visits from becoming all-afternoon affairs, most guests will stand. There will be a handful of booths with seating around the outer edge of the restaurant; no decision has been made yet on whether or how these can be reserved.” The menu has not yet been decided but Barron’s mentions hearing word of a Fuzzy Tauntaun, named after the furry snow lizards from Empire Strikes Back.

As noted in our previous coverage, the new Star Wars-themed land will serve blue milk to park guests. Barron’s reports that the drink will be nondairy. However, it is not yet clear whether or not the drink will be sold at Oga’s Cantina or in the outdoor marketplace, or both.

According to Barron’s, the shops will be supplied from a common stock from a common kitchen as part of a method to increase efficiency. “One shop will feature droids that visitors can customize through an interactive experience. A droid that is made to be, say, afraid of Stormtroopers might signal its fear when one comes close. Droids owned by members of the same group might recognize each other when they meet. Prices have not been set. The shop might also sell a full-size R2-D2 for well-heeled fans, perhaps costing thousands.”

Barron’s reports that the land will also feature another shop ran by Doc-Ondar, a collector that was briefly mentioned in Solo. This character, who will likely be animatronic, will be found in a booth apart from the rest of the staff. “Cast members might interact with Dok-Ondar, asking him what he’s willing to let certain items go for.”

Additionally, the land will also feature an outdoor market resembling a bazaar. A pod-racing engine, which Barron’s reports will most likely be found at the market, will be used to roast meat.

According to Barron’s, the creation of the Star Wars: Galaxy’s Edge for Imagineers has been a massive undertaking. “For Galaxy’s Edge, Imagineers have worked with filmmakers, chefs, and merchandise executives to take adherence to storytelling to new levels…” Barron’s also reports that a possibility of the new land could include Star Wars merchandise in shops with unique packaging designed to downplay logos. Another is that merchandise based on familiar characters could take on new looks.

What are your thoughts of all of these new details of Star Wars: Galaxy’s Edge? Let us know in the comments below!