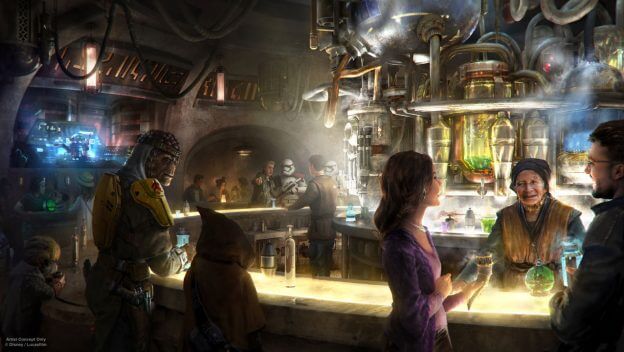 Star Wars: Galaxy’s Edge will be bringing all kinds of new experiences to Disneyland when it opens this summer. We’ve known for about a year now that one of those changes will be the relaxing of Disneyland’s prohibition against serving alcohol.

Oga’s Cantina will serve libations for adults as well as choices for children. Disney offered the following description of the cantina:

Visitors come to this notorious local watering hole to unwind, conduct shady business, and maybe even encounter a friend…or a foe. Run by an intriguing alien proprietor, Oga Garra, the cantina adheres to a strict code of conduct that tries to keep its unruly patrons in check. But with a history of being a smugglers’ safe haven and a popular stopping point for those seeking to avoid the authorities, you can bet that the cantina has a story or two to tell.

Oga’s Cantina is the kind of establishment that attracts some of the most interesting and disreputable characters in the galaxy. And you never know when a stormtrooper or a familiar face will show up. Patrons of the cantina come from across the galaxy to sample the famous concoctions created with exotic ingredients using “otherworldly” methods, served in unique vessels. With choices for kids and libations for adults, the cantina will make for a great stop!

This will mark the first time ever that alcohol will be served to guests in Disneyland, outside of Club 33. A menu of the alcoholic beverages has not yet been released, but Disney promises “the best drinks in the galaxy.”

But despite the change to this longstanding rule alcohol will not be allowed throughout the park. Responding to a question posed on Twitter Disneyland had this to say:

Hello, Rachel! At this time, Guests will be required to stay in Oga's Cantina while enjoying alcoholic beverages.

When Barron’s toured of Oga’s Cantina, they shared it was “small for aesthetic reasons.” “To maximize capacity and keep visits from becoming all-afternoon affairs, most guests will stand. There will be a handful of booths with seating around the outer edge of the restaurant; no decision has been made yet on whether or how these can be reserved.”

The menu has not yet been decided but Barron’s mentions hearing word of a Fuzzy Tauntaun, named after the furry snow lizards from Empire Strikes Back. As noted in our previous coverage, the new Star Wars-themed land will serve blue milk to park guests. Barron’s reports that the drink will be nondairy. However, it is not yet clear whether or not the drink will be sold at Oga’s Cantina or in the outdoor marketplace, or both.

It’s evident Disneyland will relax its long-standing prohibition against alcohol but don’t expect that Disneyland will become similar to Disney’s California Adventure or Epcot as it relates to their policies associated with alcohol.

Oga’s Cantina will welcome guests when Star Wars: Galaxy’s Edge opens up in Summer 2019 in Disneyland and Fall 2019 in Disney’s Hollywood Studios at Walt Disney World.

How do you feel about the addition of alcohol at Disneyland? Let us know in the comments below!