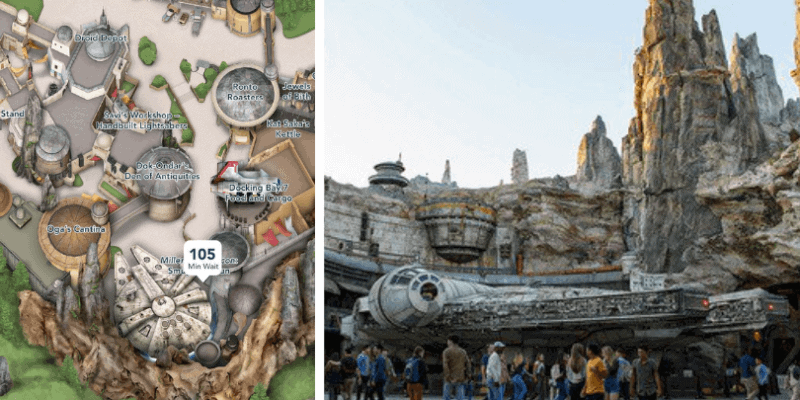 After Disney got a ton of flack for the Star Wars: Galaxy’s Edge being allegedly unsuccessful at Disneyland, fans everywhere have been saying that the land’s counterpart is going to be met with much larger crowds at Walt Disney World. While Star Wars: Galaxy’s Edge is far from empty at Disney’s Hollywood Studios, we’re not sure if it can be called more successful than it was at Disneyland. And in Bob Chapek’s eyes, success isn’t defined by crowd levels at all.

In a recent interview ahead of the grand opening of Galaxy’s Edge on the East Coast, Chairman of Parks, Experiences, and Products Bob Chapek shared his viewpoint on the reception of the land at Disneyland, how that compares to Walt Disney World, and overall what Disney defines as a successful grand opening. As we shared in a previous article after the Star Wars: Galaxy’s Edge media event, Chapek says that successful Disney Parks aren’t considered successful because of attraction wait times that are several hours long. Instead, success is defined by the great experiences that guests say they are having.

“We got over a million people through the attraction over at Disneyland so we’re learning and it’s operating extremely well…so the fact that we don’t have backup lines is actually going according to plan. That’s not a great guest experience, so we don’t define success as 10 hour waits. We define success as great guest experiences. We like to move people through and have a great time…Most of all, I think our guests are having a great time in California, and they’ll have a great time here.”

Inside the Magic had the opportunity to ask Chapek about how the success of a land like Galaxy’s Edge can impact future lands that Disney creates at its theme parks. The Chairman responded saying that even though Disney has a lot of constituents that the company has to please, it is the guests who come first.

“There’s a lot of constituents that we have to please. We have, most important, our guests. that’s the most important constituency. But we also have our Cast that we have to please. We have the local communities that we like to think that we’re good citizens of. And we have our shareholders. And so everything we do has to work in concert. You design and build something given a set of expectations, and over time you learn and you find out how to manage things.”

With a land as predictably popular as Galaxy’s Edge, Chapek is right when he says Disney had to learn how to manage crowds. Guests began lining up to enter Star Wars: Galaxy’s Edge on opening day at Disney’s Hollywood Studios in the wee hours of the morning. By around 3 a.m., massive crowds were loading into the park. By around 5 a.m., guests were allowed to enter the new land, with 300 minute wait times for Millennium Falcon: Smugglers Run being reported between 6 and 7 in the morning. But by the afternoon, crowd levels had subsided, boarding groups were no longer needed to enter the land, and even the wait time for the land’s only attraction had decreased to just over 100 minutes.

These wait times don’t necessarily reflect on the land’s success, though. But they do speak volumes about crowd control.

When it comes to managing crowds, it seems like Disney has that down to a science. With three new lands (Pandora – The World of Avatar, Toy Story Land, and Star Wars: Galaxy’s Edge) opening at Walt Disney World within the past three years, and with the West Coast version of Black Spire Outpost paving the way for the land’s counterpart to open in Florida, Disney Parks have learned just how well they need to manage crowds. This, above all else, leads to a great guest experience, something Chapek said is at the center of what the company knows they have to do.

“But the paramount to all is that we have to have a great guest experience,” he said. “And our guest experience as you all know in California is extraordinary. It’s the highest-rated land we’ve got anywhere. I expect this to be the same. And if you don’t believe me, believe TIME magazine…We’re thrilled with the way everything’s turned out [at Disneyland]. And bring on number two here.”

Do you think Star Wars: Galaxy’s Edge is a success so far since opening day this week at Walt Disney World? What’s your take on how Disney has managed crowds? Let us know in the comments!