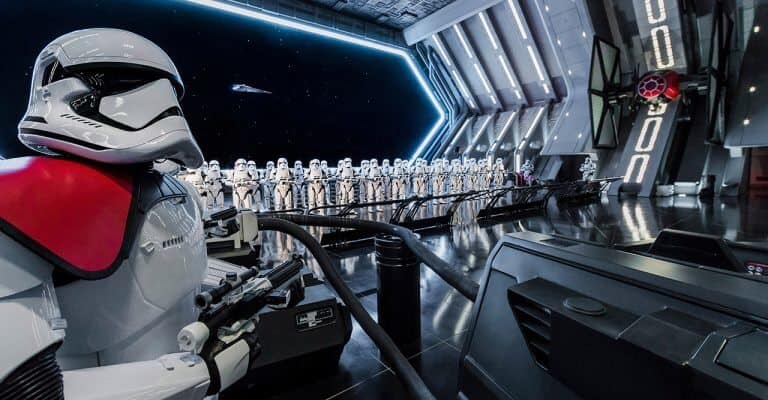 Star Wars: Galaxy’s Edge officially opens at Walt Disney World on August 29 with one of the two attractions, Millennium Falcon: Smugglers Run. Even though the second (and perhaps the most highly anticipated) attraction Star Wars: Rise of the Resistance doesn’t open until December 5, Disney just gave us a sneak peek of more details for what we can expect.

“This is the most ambitious attraction at Disney,” said Scott Trowbridge, Portfolio Creative Executive for Walt Disney Imagineering.

He’s right. Star Wars: Rise of the Resistance is truly the most ambitious, state-of-the-art attraction Disney has ever created.

While attending the media preview event for Star Wars: Galaxy’s Edge at Disney’s Hollywood Studios, we were able to fully understand what’s to come with this new attraction, and we knew our Inside the Magic readers and Star Wars fans would want to know. So here is a walkthrough of what you can expect when you experience Star Wars: Rise of the Resistance.

The attraction starts by boarding an ITS (Intergalactic Transport System). As you enter, you’ll see Poe’s X Wing to the right. Poe is the wingman for the troop transport in the attraction. When the Star Destroyer captures the Troop Transport, Poe is able to escape. That’s where we come in: to help Poe and the Resistance. But remember this: our critical mission is that we “don’t reveal the location of the Resistance base.”

When our team at Inside the Magic got to walk into the Star Destroyer, we got chills: this attraction is so well done. Rows of live Stormtroopers and First Order leaders greet guests. It’s scary though, and totally immersive. If you thought Millennium Falcon: Smugglers Run put you into the Star Wars story, this attraction takes that feeling to a whole new level.

On the Star Destroyer, guests get on a troop transport ship–an eight-person ride vehicle that is driven by an F-5 droid. Because Star Destroyers are so massive, you get lost as you’re trying to escape, and you eventually make your way to the Escape Pods. From there, this attraction completely transforms from a trackless dark ride to something so much more, almost like Tower of Terror meets Star Tours, but even more incredible.

The Troop Transport vehicle goes into the escape pod, and this is where the attraction becomes somewhat like a Star Tours experience but with a much larger screen, combined with the controlled drop somewhat like Tower of Terror. This controlled drop occurs when the floor beneath the escape pod “falls out.” We don’t know how big of a drop guests will experience, but we do know it’s enough to truly make you feel like you’re experiencing everything you are told you are experiencing.

As you can tell, this attraction has multiple ride systems (specifically four ride systems, although we haven’t yet experienced all of them) and combines them in unique ways. You even encounter Kylo Ren and become prisoners of the First Order at one point…but we’re not going to spoil it for you. Don’t worry, though; there’s a happy ending. But Disney is keeping that quite secret, even from us. We guess we’ll have to wait until the attraction is open before we can share all the information with you. But trust us when we say this–Star Wars: Rise of the Resistance is truly deserving of all the hype Disney is giving it.

“I think that’s going to redefine the ambition for an attraction that Disney could do and set a new high watermark that will continue to put us in a place that we’re proud to be in,” said Bob Chapek, Chairman of Parks, Experiences, and Products for The Walt Disney Company. And from what we can tell, he’s definitely right.

Are you excited for Star Wars: Rise of the Resistance to open at Walt Disney World on December 5 and at Disneyland on January 17? Let us know in the comments!