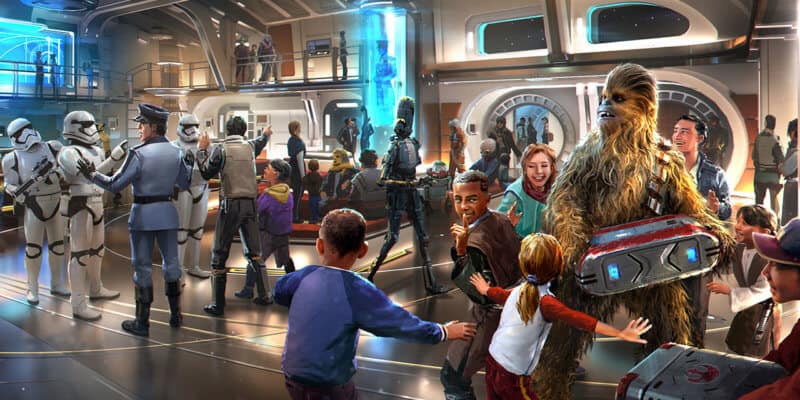 On the tails of some huge announcements at D23 Expo weekend, we’re now getting even more details revealed about the new Star Wars hotel coming to Walt Disney World, called the Galactic Starcruiser.

In an exclusive interview with Inside the Magic during the media preview of Star Wars: Galaxy’s Edge, which officially opens to the public this week on August 29, Bob Chapek, Chairman of Parks, Experiences, and Products for The Walt Disney Company, shared some more information about the upcoming Star Wars: Galactic Starcruiser, the cruise-like hotel coming soon.

The Galactic Starcruiser, whose ship name is officially dubbed the Halcyon, will be welcoming guests onboard in the future to experience Star Wars like never before. But as we’ve shared since more information was revealed during D23 Expo weekend, the Halcyon does not follow a typical hotel model. It’s like a cruise experience on land, and Disney makes it sound even cooler than we ever thought it could be.

“We dream big. We have lot’s of ambition. And I think what we can take away from it is that we’re not wed to what would typically be, what we would all think of as a ‘hotel model,'” said Chapek during the interview. “You know, we talked a lot about the Disney bubble. When somebody comes to Disney, we don’t define our day as attraction A, attraction B, attraction C, and that’s your utility of how you enjoy your day. We look at it as experiential, whether it’s how you transport yourself with the Skyliner to get from point A to point B in a themed gondola, or whether it’s your hotel experience, we don’t want to be defined by that.”

During the interview, Chapek continued to share why the Star Wars: Galactic Starcruiser is so special–it transports guests beyond your typical hotel experience and puts them right in the middle of the Star Wars magic. He said that he and the rest of Disney want to implement more experiential attractions and hotels in the future, and this experience onboard the Halcyon could lead to other experiential hotels of this type in the future.

“We want to have more experiential things. And I think the Halcyon will be the perfect example of the type of experience that we have the ambition to try to create,” said Chapek. “And take that for what it means, whether within the ‘Star Wars’ mythology or even beyond the ‘Star Wars’ mythology. We want to go ahead and define the typical categorization of ‘I’m on a transport vehicle to get me to a park,’ ‘I’m in a hotel.’ And I think the cruise model is a great model because it’s very community. Everybody comes together and experiences something in a deep mythology way beyond something that might typically be had if you were staying either on or even off property.”

In case you aren’t caught up, here’s how Disney describes the Star Wars: Galactic Starcruiser.

Star Wars: Galactic Starcruiser will offer a two-night itinerary where all guests arrive and depart together, similar to Disney Cruise Line. Unlike any typical cruise, though, you can become the heroes of your own Star Wars story in a new type of immersive experience that only Disney could create.

You will cruise the galaxy in style aboard the Halcyon, known for its impeccable service and exotic destinations. Onboard, you will stay in well-appointed cabins, experience onboard dining, make a planet-side excursion to Black Spire Outpost on Batuu, and much more. Throughout the journey, you will be invited to delve deeper into your personal adventure by participating in onboard activities, interacting with characters, crew, other passengers you meet, and becoming part of the action and the broader Star Wars saga.

You can read even more about the Star Wars: Galactic Starcruiser in our dedicated recap from D23 Expo here.

What do you think of the all-new Star Wars hotel coming soon to Walt Disney World? Let us know in the comments!