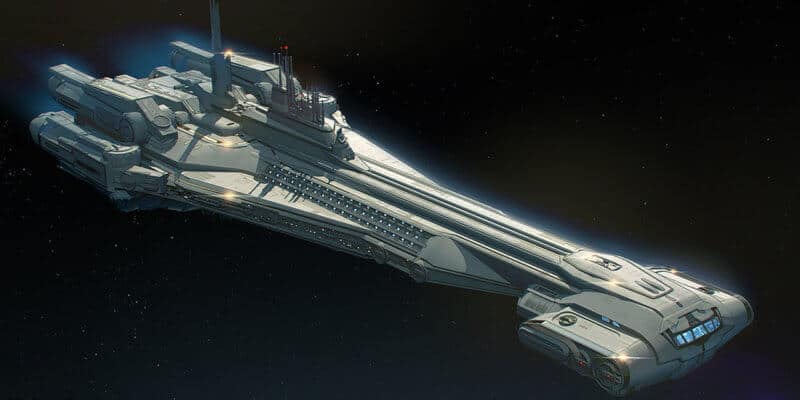 This evening Disney has revealed even more news ahead of the official start of the D23 Expo. After getting a surprise with the Moana attraction coming to Epcot now we know the name of the new Star Wars hotel coming to Walt Disney World. Ann Morrow John, Executive Producer Walt Disney Imagineering, shared a model of the Star Wars: Galactic Starcruiser named the Halcyon.

Disney is really into this idea that you’re not in a hotel but on a ship. The Halcyon is a “glamorous space cruise ship” where guest can stay multiple days (specifically, two nights) onboard a star cruiser. This ship is massive with 13 engines on the back. They put it up next to a model of the Millennium Falcon to show the scale of how big this ship is going to be–it makes the Falcon look miniature. Additionally, concept art will be shown at the “Imagining Tomorrow, Today” pavilion at the D23 Expo, but as of right now, this is all that is available. It is good to know that the Star Wars: Galactic Starcruiser will be a focus during the convention as we don’t have much information on this project just yet.

Star Wars: Galactic Starcruiser will be a new, first-of-its-kind vacation experience where guests will check in for a two-night adventure aboard a glamorous starship. Once onboard, guests will interact with characters and become active participants in stories that unfold around them on their galactic journey.

There has been no official word on pricing for the experience and honestly, I doubt we would get that detailed of information here, but who knows. This is not even day one of the D23 Expo and we are already getting some very, very exciting news. Keep your eyes peeled for more from us here on Inside The Magic!

How excited are you to experience an intergalactic adventure aboard the Star Wars: Galactic Starcruiser?