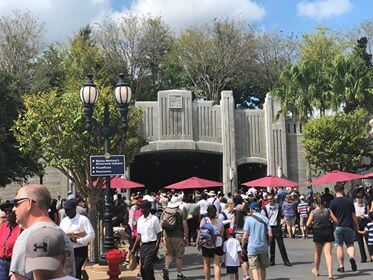 Ever since Star Wars: Galaxy’s Edge opened at Disneyland with a reservation system back in May (and since it opened fully to the public in June), fans everywhere have been wondering just how the grand opening of the most anticipated land ever would go at Walt Disney World. And today, we found out it’s completely out of this world.

Bright suns. For all of those arriving today – May the force be with you. #GalaxysEdge pic.twitter.com/CdN5PXFvYk

With the Extra, Extra Magic Hours in place right now for Walt Disney World Resort hotel guests, “Star Wars” fanatics and Disney Parks enthusiasts alike began entering Disney’s Hollywood Studios as early as around 3 a.m. on Thursday, the grand opening day of Galaxy’s Edge. As hours went on, crowds continued to grow as guests piled into the theme park, waiting for their chance to enter Batuu. And finally, at around 5 a.m., Disney Cast Members began letting the first (and perhaps most eager) guests enter Galaxy’s Edge.

3AM update: I guess the critics were right! NOBODY cares about Star Wars Galaxy’s Edge ?? #galaxysedge pic.twitter.com/q2Xq4ZXTPx

Within the first hour or so after guests were allowed into Star Wars: Galaxy’s Edge, lines already started to form for every experience within the land. Even Kat Saka’s Kettle (which serves the sweet and spicy popcorn mix in the Marketplace) had a line. By almost noon, the line for Millennium Falcon: Smugglers Run reached around the land’s perimeter, and lines for the rest of the dining and merchandise locations were within the land’s center. 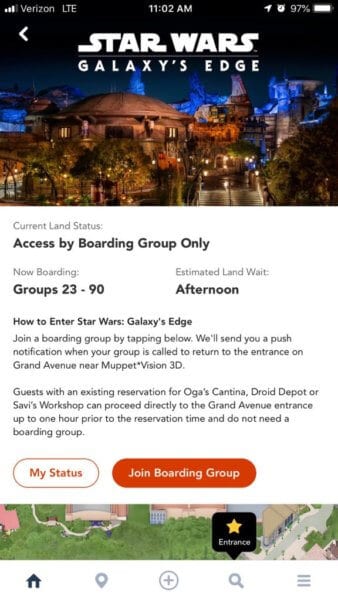 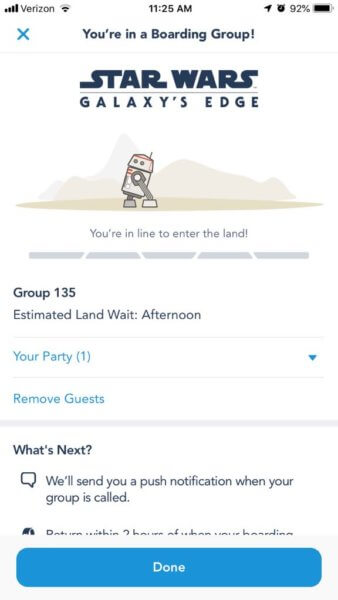 Since this morning, Disney’s Hollywood Studios began implementing a virtual queue in the form of Boarding Groups (just as they were implemented at Disneyland back in June) in order to allow access into the new land. In an exclusive interview earlier this week, Chairman of Parks, Experiences, and Products Bob Chapek shared that Walt Disney World had a virtual queue in place if it ever came to the point that they needed to implement it. And already, guests who were the first to enter Star Wars: Galaxy’s Edge during Extra, Extra Magic Hours were seeing the virtual queue on the Walt Disney World app, although they were unable to actually join the queue until Disney’s Hollywood Studios officially opened for the day. Guests who join Boarding Groups have two hours to enter the land after their group is called (you will be notified via the app).

Keep in mind that if you are visiting Star Wars: Galaxy’s Edge with a reservation to any of the experiences within the land (such as enjoying provisions at Oga’s Cantina or building your own lightsaber at Savi’s Workshop), you will not need to join a boarding group. You will be allowed access into Star Wars: Galaxy’s Edge beginning one hour before your scheduled reservation. 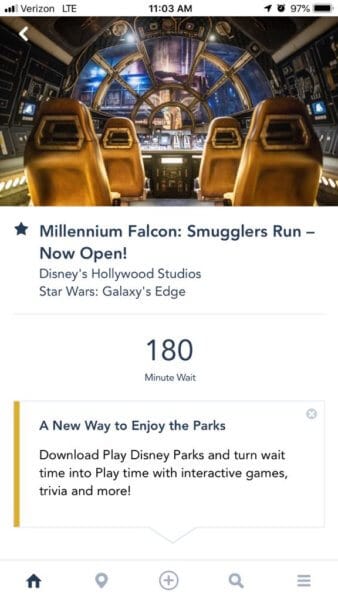 But by around noon, crowds had began to subside and weren’t nearly as massive as they were between the 3 and 6 o’clock hours this morning hen guests had began crowding Disney’s Hollywood Studios. The land is still crowded, wait times are still long, and the overall area is definitely busy, though.

Still, even with the massive crowds, Star Wars: Galaxy’s Edge still feels very managed by Disney. Wait times for Millennium Falcon: Smugglers Run were reported to be near the 300 minute mark by 7 a.m. this morning, but have since died down to around 180 minutes (or less or more, depending on fluctuating crowds as boarding groups enter and exit). Our team at Inside the Magic remarks that the crowd levels for this land’s opening day feel a lot less chaotic than those on the grand opening of Toy Story Land at Disney’s Hollywood Studios and even Pandora – The World of Avatar at Disney’s Animal Kingdom.

We’re still reporting live from Star Wars: Galaxy’s Edge at opening day at Walt Disney World, but we want to hear from you. Are you planning to visit Star Wars: Galaxy’s Edge this week? Did you already enter the land today? What do you think of this land’s opening compared to other lands at Walt Disney World or compared to its counterpart at Disneyland?

Share your thoughts on the grand opening of Star Wars: Galaxy’s Edge at Disney’s Hollywood Studios in the comments!