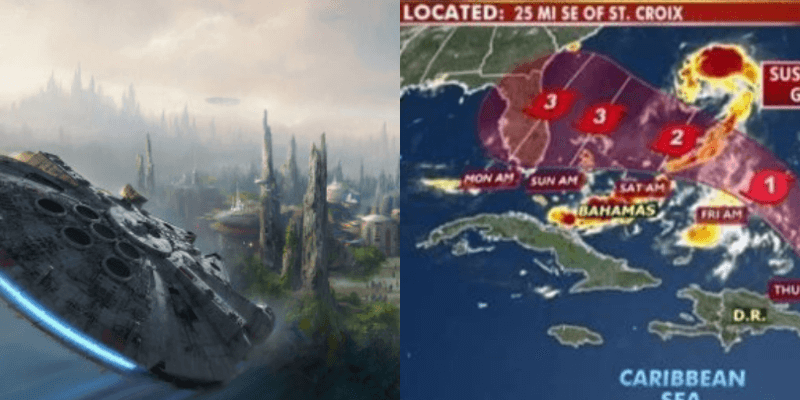 Everyone heading to Disney World this weekend to celebrate the opening of Star Wars: Galaxy’s Edge has the same 2 questions on his or her mind: Why did they open the land without both attractions operating, and more importantly, will Hurricane Dorian wreck the big opening celebration this weekend?

Many Guests put off their yearly trips to Disney World until this weekend because they wanted to be among the first to experience Galaxy’s Edge, drink the blue milk, and swap lightsaber fury with a pair of Stormtroopers on patrol.

But now Hurricane Dorian, which was just upgraded to a Category 1 storm from a tropical storm this afternoon, threatens to put a damper on those prospective lightsaber duals–and more.

Currently, the storm is making its path in a northwesterly direction toward Florida at 13 miles per hour. It is expected to strengthen to as much as a Category 3 hurricane with sustained winds of between 111 and 129 miles per hour, according to the latest updates from the National Hurricane Center.

Disney World lies approximately 50 miles from the coast, making the forecast of the storm’s trajectory very important to this weekend at the parks. Different types of hurricane models give extensive information about the tropical storm. However, a few of them disagree with one another on the trajectory of the storm after it passes north of the Bahamas, which is significant for the multitudes of reveling, happy, Star Wars-ing Guests at Disney World this weekend.

The GFS model shows Dorian remaining at sea, moving up the east coast and keeping away from land. But the Euro model suggests a much different path, with Dorian making landfall somewhere between St. Lucie and Port Canaveral. The Euro model also has the storm traveling through the state, heading toward Tampa.

If Dorian does make landfall, the latest updates have Disney World park-goers in a sea of ponchos, braving fierce winds at times.

Walt Disney World is known for keeping guests aware of severe and the impact it could have on their stays. As of today, Disney has yet to issue any kind of statement regarding the storm. Disney World had to temporarily close its gates for Hurricane Irma in 2017 and for Hurricane Matthew in 2016. We’d hate to see that again at any time of the year for parkgoers, but since this weekend marks the first weekendGalaxy’s Edge is open, as well as the beginning of the Epcot International Food and Wine Festival–not to mention that it’s Labor Day Weekend–would just be the most unmagical thing to endure.

We’re hoping all the Jedis out there can use the Force to stave off any pesky hurricane-force winds and torrential downpours.