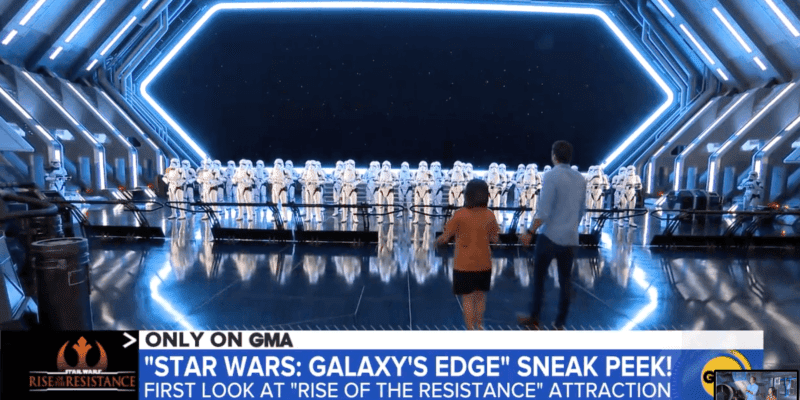 Star Wars fans–get ready to be captured by the First Order to be taken on an out of this galaxy adventure as Disney has offered fans a first look at their second attraction coming to Star Wars: Galaxy’s Edge at both Walt Disney World and Disneyland: Star Wars: Rise of the Resistance.

The special sneak peek came on Thursday’s episode of Good Morning America in an intergalactic segment in which the show visited the Rise of the Resistance at Star Wars Galaxy’s Edge in Walt Disney World. In the segment, GMA not only discusses details of the new ride but they also give a never before seen look at its otherworldly interior and ride vehicles.

In the special, GMA reporter Will Reeve takes a walk through major parts of the attraction. These include a small area outside of the attraction by Poe’s X Wing, inside of the ITS (Intergalactic Transport System) and the hangar bay of a Star Destroyer.

The ITS serves as the first transport (ride) system that guests experience on Rise of the Resistance. This is what begins your mission as guests travel on the ITS to get to a secret mission with general Leia Organa. However, this gets overtaken by the First Order.

After walking through the ITS, Reeve comes out to the incredibly themed hangar bay of a Star Destroyer. Upon entering the area, we see 50 Stormtroopers standing guard and the immersive scenery that makes up the spaceship.

Disney Imagineering wouldn’t reveal any more details about the attraction. However, Inside The Magic did get a special sneak peek at the experience a few months ago at the opening of Star Wars Galaxy’s Edge at Walt Disney World. And beyond this point of the experience, guests are then taken onto a troop transport ship–an eight-person ride vehicle that is driven by an F-5 droid. At this point in the experience, your mission is to escape the Star Destroyer–but because the Star Destroyer is so massive, you get lost as you’re trying to escape. However, eventually you make your way to the Escape Pods.

Once your trackless ride vehicle reaches the escape pod, it then drives right into it seamlessly and you begin your next part of the attraction. This is where the attraction becomes somewhat like a Star Tours experience but with a much larger screen, combined with a controlled drop somewhat like Tower of Terror. This controlled drop occurs when the floor beneath the escape pod “falls out.” We don’t know how big of a drop guests will experience, but we do know it’s enough to truly make you feel like you’re experiencing everything you are told you are experiencing.

As you can tell, this attraction has multiple ride systems (specifically four ride systems, although we haven’t experienced all of them just yet) and combines them in unique ways.

Will you be visiting Star Wars: Rise of the Resistance when it opens at Walt Disney World and Disneyland? Let us know in the comments!

Comments Off on Disney offers first look at Star Wars: Rise of the Resistance at Galaxy’s Edge