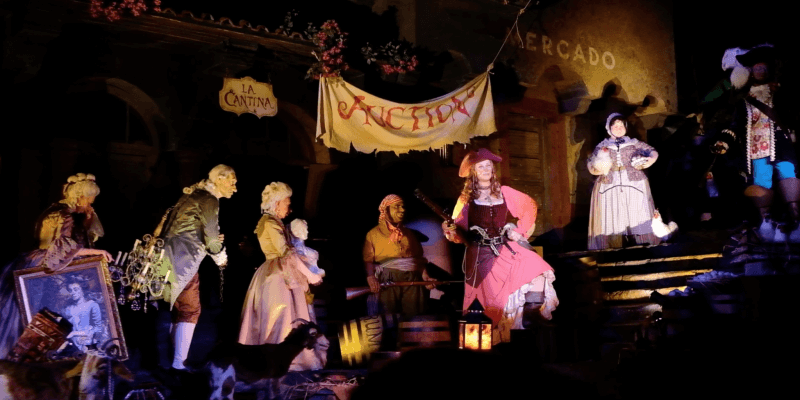 Captain Jack Sparrow may be Disney’s darling buccaneer, but the Walt Disney Company has been courting pirates for over eighty years (Silly Symphonies, 1932 “King Neptune” vs pirates).  “Treasure Island” brought swashbuckling action adventure to the big screen a full five years before Disneyland opened to the public. For this installment of Varying Attractions, we’ll be setting sail for the high seas. Our destination is the various versions of the Caribbean and the plundering pirates who patrol these tropics for treasure. Starting with animated adventures during the Great Depression, brazen buccaneers have unfurled their sails within the depths of Disney entertainment. Beginning with animated shorts like Silly Symphony’s “King Neptune” and continuing to this day (“Pirates of the Caribbean: Dead Men Tell No Tales,” 2017) these silver screen swashbucklers shared their adventures with eager audiences.

From drama to comedy, clever cutthroats have rifled and looted in movies like “Blackbeard’s Ghost,” “Muppet Treasure Island,” “Treasure Planet” and 5 more recent big budget blockbusters in the “Pirates of the Caribbean” series starring Johnny Depp. Such was their sway that Walt Disney chose to honor these colorful characters with a dedicated dark attraction at Disneyland. March of 1967 saw high seas adventure descend upon New Orleans Square as one of the final attractions that Walt himself planned. With a stirring song to guide their course, guests were soon singing along to X Atencio and George Bruns catchy “Yo Ho (A Pirate’s Life Me)” as they floated past various animatronic adventures replicating pirate plunder and mayhem.

Over the years, the attraction has undergone several changes. In addition to making the attraction more politically correct, movie characters like Captain Barbossa and Captain Jack Sparrow have been introduced into the storyline as well as a waterfall-projected vision of Davy Jones and Blackbeard.

Located in the heart of New Orleans Square, this original incarnation of Pirates of the Caribbean is also the longest one, having a ride time of just over 15 minutes. Once on board, the action takes a bit longer to commence as riders first pass the Blue Bayou restaurant as slow banjo riffs seem to emanate from nearby boats. With a brief warning as to what lies ahead, the boat plummets for one of two falls as the adventure begins to unfold.

Florida’s Pirates attraction is located in Adventureland within a Spanish fort. The dimly lit queue winds past defensive supplies (cannon balls, dynamite, and racks of rifles) and past a pair of pirate prisoners playing chess – such is their stalemate that they’ve become skeletons. With a few minor differences in how the adventure begins, along with one less drop and a final Jack Sparrow treasure room scene, Walt Disney World’s Pirates of the Caribbean is very much like its Anaheim counterpart.

Combining elements from Anaheim (New Orleans setting and Blue Bayou/banjo beginning) and the Jack Sparrow treasure room scene, this Adventureland attraction has guests entering and queuing through Pirate Laffite’s home. Tokyo’s version also appears to have more of the original incarnation of the attraction intact.

The French pirate attraction, also in Adventureland, winds guest through several outdoor areas before they enter a battle-scarred fortress. Within the confines of the fortress, dungeon scenes reveal imprisoned pirate skeletons before ending up at the nocturnal load area. Similar to California, the boat ride glides past a restaurant. Variations include passing through a shipwreck, pirates swinging overhead, and an explosive photo op.

While the terrific trio of treasure hunting pirate attractions listed above-provided inspiration for the Johnny Depp “Pirates of the Caribbean” major motion pictures, and have since been retrofitted to include elements from the series, Shanghai’s swashbucklers have come full circle with a high tech tribute to the FX-heavy silver screen features. Found within the Treasure Cove section of the new theme park, this modern version has a unique name to match its unique location: “Pirates of the Caribbean: Battle for the Sunken Treasure.” State of the art special effects and familiar film scenes take guests over and under the ocean on this feast for fans of the films. Of course, as with the movies, there are a few nods towards the classic Pirates of the Caribbean attraction from Anaheim, but even those come with a twist.

While some bemoan the changes that have taken place over the years (from altering pirates chasing women to the women chasing the pirates, changes to the lady in the barrel and the Bride Auction) as altering historical representations, along with being upset over changes to a “classic attraction” in general, keep in mind that the attraction itself is a fictional glimpse into a pirate’s life, to begin with, and these attractions are part of a family-friendly theme park. This may help to ease into the changes.

Pirates of the Caribbean remains a delightful, whimsical adventure that has a home at all but one of the Walt Disney Company theme parks (the attraction is not found at Hong Kong Disneyland). Though they may differ slightly in appearance from park to park, these seafaring adventures will always share the honor of being tied to the final ride directly planned by Walt Disney himself.