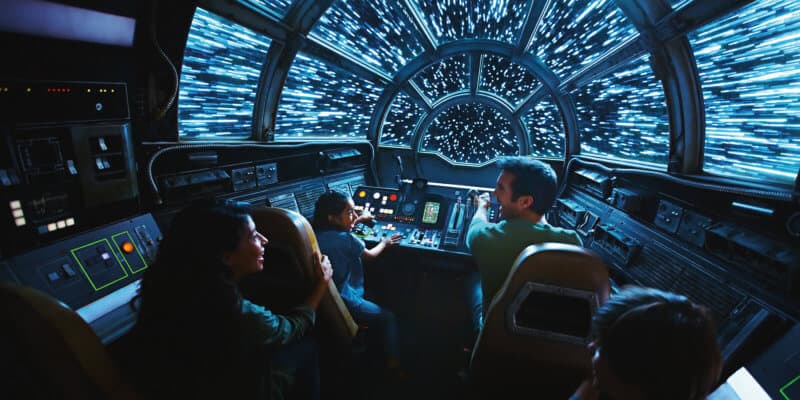 Heads up, “Star Wars” fans. The all-new land at Disneyland and Walt Disney World is taking over T.V. screens. Disney is kicking off a media blitz to promote Star Wars: Galaxy’s Edge, and some say it’s in an effort to “save” the new land.

Since Disney is the parent company of ABC, it’s pretty fitting for Star Wars: Galaxy’s Edge to be promoted across the television network. Disney has begun airing promotional spots for Star Wars: Galaxy’s Edge on ABC’s “Live with Kelly and Ryan” and “black-ish.” The media takeover will continue with the new land being promoted on several other ABC shows, like “Good Morning America,” “The View,” “Nightline,” “Modern Family,” and “Dancing with the Stars.”

The promotions are continuing on other Disney channels. Neil Patrick Harris is hosting a two-hour special on Freeform to promote Star Wars: Galaxy’s Edge alongside other well-known celebrities. Disney Channel is attempting to win over the kid and pre-teen audience with segments that feature Disney Channel stars building droids, drinking the famous blue milk, and riding Millennium Falcon: Smugglers Run. And even sports fans won’t be able to avoid ” Star Wars” with “SportsCenter” airing a Galaxy’s Edge segment.

So why so much promotion? Well, some think Star Wars: Galaxy’s Edge has failed at Disney Parks. With reports of low attendance, some thinking there’s not enough to do, and others saying the land doesn’t appeal to the masses, many believe that Disney missed the mark with Galaxy’s Edge. Millennium Falcon: Smugglers Run has received mixed reviews even though it isn’t even supposed to be the land’s headlining attraction. And “Star Wars”  superfans think Disney should have based the land on the original “Star Wars” trilogy instead.

But even with reports of attendance unexpectedly low — and amid that, a Disney Parks executive stepped down — that doesn’t mean it was at the fault of Galaxy’s Edge. Many think Disney priced guests out of the new “Star Wars” land by raising ticket prices earlier this year, and some believe that there were so many reports that the land would be so crowded at Disneyland that this scared tourists away.

Low attendance at Disneyland could be explained in part by the fact that most annual passholders were blocked out for almost the whole summer after Galaxy’s Edge opened on the west coast. And lower attendance at the new land at Disney’s Hollywood Studios could be attributed in part to Hurricane Dorian, which led to the cancellation of Disney vacations just a few days after the land’s grand opening.

No matter how you spin it, it’s clear that Disney is trying to promote Star Wars: Galaxy’s Edge now, maybe more than ever before. And as Motley Fool reports, it’s not too late. Rise of the Resistance — dubbed the most advanced and mind-blowing attraction we’ll see at a Disney Park — opens in Florida this December and in California in January, and many believe that’s what will “save” the new land.

But over here at Inside the Magic, we’re pretty big fans of Galaxy’s Edge. And it’s safe to say we’re excited to see what comes next.

What do you think of Disney’s new media campaign to promote Star Wars: Galaxy’s Edge? Let us know in the comments!